Serious Sam 2 can be described as the bastard child of the entire Serious Sam series. It's not a bad game at all, but back then, everybody hated it because it totally ruined the Serious Sam universe FOREVER with its cartoony graphics (which have actually held up pretty well) and because the game spawned enemies a few at a time instead of all at once. These days, the biggest count against it is the unfunny “humor”, which mostly gets in the way.

This game has lots of loading screen images that are not used by any levels; unfortunately, the corresponding maps are gone.

Loading images for the E3 2005 demonstration can be found, but the maps themselves are gone.

Unused level loading screens included with the Deathmatch patch show there was going to be a Capture the Flag mode included with the game at one time. No coding nor models show any trace of a CTF mode, so these images are likely the only remnants from it.

Loading screens for a few unused multiplayer levels can be found in the Deathmatch patch; DM-Cockalikee, DM-DesertTemple, and DM-Dockingbay. Of note is that DesertTemple was supposed to be a port of the only DM map included with Serious Sam: The First Encounter, while Docking bay comes from Serious Sam: The Second Encounter.

Loading images for various testing levels can be found, but none of them are accessible. 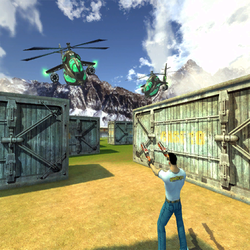 In the final game, only the Revolver and Uzis are dual wielded. However, a model for an item called “combo-weapons” can be found, which consists of two Chainsaws side by side. It can be assumed that this was supposed to be for some sort of scrapped dual-wielding system. This can somewhat be seen in the image for the testing room for flying enemies, which shows Sam dual-wielding the Double Shotgun, which is not possible in the final game.

A dual-wielding system would finally get a public release in a surprise patch released on March 23, 2021, to mark the Serious Sam franchise's 20th anniversary.

HUD images for two unused weapons, Plasma Beam Gun and voodoo_gnarr, can be found. A world model and coding exists for the Beam Gun, but there is nothing associated with the Voodoo Gnaar outside of the HUD image.

The Beam Gun would finally get a public release in a surprise patch released on March 23, 2021, to mark the Serious Sam franchise's 20th anniversary.

Textures for a “Thief” enemy can be found in the “Enemies” section of models. It does not have a model, but when the texture is opened up, it is identical to the one on the “Gary the Thief” player model. Even stranger is that the Gary the Thief player model has no textures in its folder, meaning it references from the entry in the Enemies section. It seems likely that there was supposed to be a Thief-type enemy, but it was scrapped and the model was instead transformed into a multiplayer player model.