Lo Wang returns with more penis jokes than ever before!

In the game's hub location, there is a partially visible but seemingly unreachable portion of the map. It is, in fact, a set of Trials to be played in cooperative and afterwards, single player mode as well. Reaching the area in the single player mode would require precise movement and mechanic abuse; by climbing a nearby rock formation, the area can be seen and explored. The area is accessible in cooperative mode after beating mutated Kamiko and acquiring the portal to Ameonna (requires The Way of the Wang DLC).

A test level left in the game files, featuring some buildings, a tree and... Mezu for some reason. It can be accessed by entering "map kuba" from the in-game console. Attempting to teleport while on this map will simply teleport you to the very same location you teleported from. 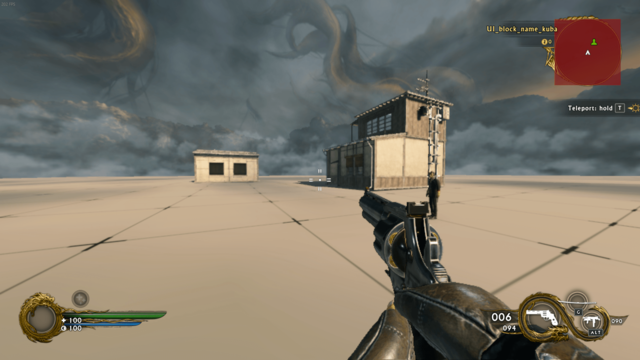 In pc_arch_scripts.bin/data/scriptsbin64/gameplay/base_templates/weapons, some leftover scripts from Shadow Warrior 2013 can be found, such as:

Under pc_arch_scripts.bin/data/scriptsbin64/gameplay/base_templates/e3 a number of E3-related scripts can be found. They range from level generation to trailer playback.

pc_arch_scripts.bin/data/scriptsbin64/gameplay/levels contains a large amount of scripts for testmaps and E3 levels.

pc_arch_scripts.bin/data/scriptsbin64/gameplay/debug also contains some E3-related scripts, in addition to some for PAX.

During the later parts of the game's story mode, Kamiko is seen sitting on Lo Wang's bed. However, in some instances, playing the game in multiplayer can glitch her sitting animation into loading a unused T-Pose lip sync test animation.