Shin Megami Tensei: DemiKids Light and Dark star Jin and Akira as well as Rand and Gale, their familiar guides.

In Dark, Akira works to ensure that time portals are shut down and erased. In Light, Jin works with a rebel insurgency that is fighting an evil emperor while also experiencing time portals.

The gameplay, while similar to Pokémon, has its differences while retaining the "catch everything in sight" mentality as well as Shin Megami Tensei's difficulty and attitudes. 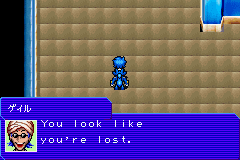 This character portrait exists solely, it appears, for purposes of sequence breaking to not display a blank portrait or a crash, and as such it may be an Error Handler. An actual portrait of the character does exist in the game. 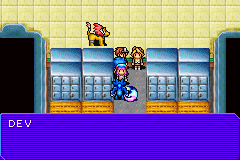 This dialogue exists in both the English and Japanese version in the same format, and the same way. It solely says "DEV".

There is also some placeholder text in Dark from Rena that says "Akira, A lots happened, but everything's alright now, It was definitely a trip. I had a great timeǃ" That text from Rena is presumably from the end of the game in some way. 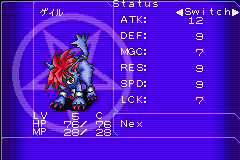 A placeholder demon that exists solely until you get Gale/Rand into your party. Both characters' names are not translated at this time in the game as they are separate characters. This placeholder also exists for the same purpose in Fire and Ice.