Go on a Strange Journey to Antarctica and attempt to save the world from the Schwarzwelt. 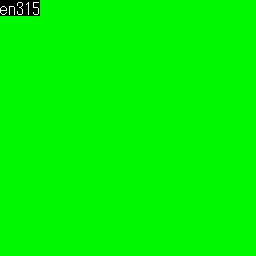 Placeholder sprite images for demons. The red and green sections of each are intended to be transparency. The larger size of the second sprite is mostly only used for bosses.

A dummy image for character and demon sprites.

A dummy image for Demonica conversation portraits. It says the same thing as the sprite dummy image.

Pixie's design from Soul Hackers was left in the game.

Moloch's design from Shin Megami Tensei NINE was also left in the game, and is substituted in favor of his design from the original Devil Summoner.

The following Action Replay code will make the menu accessible through the L + Start button combo: 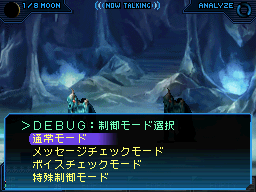 Normal Mode: It gives out certain text about the CHK data and shows the demon ID. The demon will always give you an item and the battle will automatically end after showing the Demon ID.

Message Check Mode: This shows all options about the demon reactions when contacted. However when you select a option, it loops the text forever, hence a softlock.

Voice Check: Plays the voices of the demon that the player contacts.

Special Control Mode: Offers three options. However picking any of them immediately ends the battle.

If the game detects that you're playing a pirated copy, No random encounters will then be found when exploring. Additionally, the game's save data will then be corrupted when saving and the game will crash at random points.