Shovel Knight: Treasure Trove is concrete proof that you don't need to own traditional weaponry to be an unstoppable killing machine.

Prior to the release of King of Cards, this was the only track that existed within King Knight's .fsb file, and was added to the game upon the release of Specter of Torment in advance.

The 51st track on the Shovel of Hope soundtrack is this strangely different-sounding tune. This theme was also released under the name "Mystery" with the original distribution of the .NSF files for this game's soundtrack. This track can be played over the Troupple King's dance in-game by using the code TR&FDNC. This song would later see the light of day as a part of Shovel Knight Showdown, as a possible music track on the Troupple Pond stage, over 5 years after it was added to the game.

Found among the Village's NPC files is this basic animated sprite of a character simply referred to as "Princess". Shovel Knight's artbook reveals that this character is actually an early version of Shield Knight, which was used in an equally early draft of the story. The developers went on to completely overhaul her character, namely making her a knight, in order to make her an equal to Shovel Knight.

Found above the vertical area where the fight against Zitz takes place is what appears to be a cruder version of the background. This graphic actually comes from the level "Wookie Hole" from the original NES Battletoads. When asked, one of the developer revealed[1] that the graphic team simply wanted to have a reference, to figure out more easily how to copy the original's isometric view as they made the new background.

A tile composed of a transparent square with a red outline and the initials "TB" inside of it, standing for something along the lines of "Tile Breaks".

Two rows of 6 of the aforementioned "TB tiles" can be found hidden behind the layers of Tinker Knight's boss room. When asked, one of the developer went on to say[2] that these tiles are used to signify breakable tiles in the level editor, and that they are visible in-game (albeit only if one was to disable most of the layers) in Tinker Knight's boss room due to a mistake.

For some reason there is a copy of the throne hidden behind the front layer in King Knight's boss room. And to the left of it is yet another obscured throne, except this time only the "cushion" tile of it is present.

Hidden out of sight on the left-most side of Armor Outpost is a sign facing the left, as well as a few ground tiles extending further than normal. It's possible that there was at one point an exit to the area here, but now only the sign remains.

For some reason there is a stationary, motionless solid blue Troupple beside King Troupple that is hidden behind the water layer.

In Shovel Knight: Specter of Torment is an unused level 3 upgrade for Specter Knight's "Throwing Sickle" ability. It increases the amount of Sickles you can have on-screen at once to 3, and allows you to charge to throw sickles both in front of and behind you.

Internally, Specter Knight's level from Shovel of Hope is called "deathvillage", which was likely changed due to how blunt it is.

The music files for the Tower of Fate levels in Shovel of Hope are missing a file for a second level, jumping to the third instead.

The Japanese version of Shovel Knight came out much later than the rest of the world, in order for it to be localized as opposed to simply being translated. As such, it received a bit of extra love, in direct reference to all those regional changes that NES and Famicom games went through back in the day. These changes can be viewed in non-English languages by entering the cheat code KUWA-GATA.

The title screen was given additional Japanese subtitles. 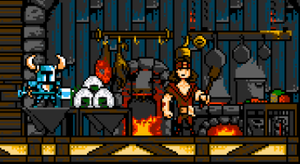 In the Japanese version, in addition to all of the food items already in the game, the Gastronomer has a chance to make an onigiri, which is a traditional rice ball dish.

Some enemies, like the Dragon Whelps pictured above, were given additional frames to their animations to better reflect the capabilities of the Famicom Disk System.

When using the "Enable Japanese Localization" cheat while set to the Japanese language, a couple of item pickups undergo additional changes. The carrot is turned into a Daikon Radish, and gold coins are given a vertically-oriented redesign. 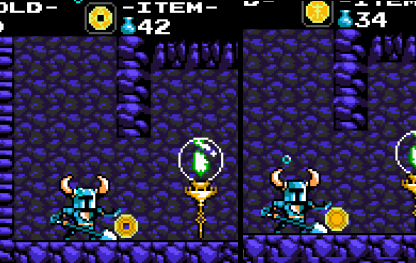 In addition, the Midas Coin is also changed to resemble a Yen coin when using the "Enable Japanese Localization" cheat while set to the Japanese language.

A few enemies have altered color schemes: the knight enemies in the Tower of Fate Ascent have blue accents instead of yellow, while the ice wizards in the Stranded Ship have a much brighter and more saturated color scheme (gaining a unique blue outline in the process).

The statues in the background of the Hall of Champions were redrawn.

A few sound effects were altered: the Gryphon and Bubble Dragon swapped death noises, the Fairy makes a different sound when biting, and flame magic (such as those cast by wizards and the fire rod) uses the same sound effect for the floor burners in the Explodatorium instead of the generic "magic" noise.

Shovel Knight has a snot bubble when he's sleeping by the campfire in the Japanese version.

Finally, the "Butt Knight" cheat has an alternative specifically for the Japanese language option. Use the cheat IKA-TAKO to enable Squid Mode, which is similar in concept to Butt Knight but using the word "tako" instead.