An advancement on the jetpack shoot'em up Section Z, Side Arms Hyper Dyne adds different weapons, a new "Fusion" system to upgrade the player's craft, and a cooperative two-player mode.

What makes this game's Dyne hyper is anyone's guess.

There are a number of debugging functions left in the game. All functions require that the Test Mode dip switch be turned on after the copyright screen appears.

Set the Slot A / Slot B credit settings to the appropriate values to start on a different stage. 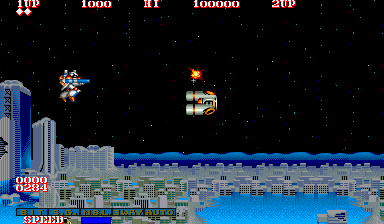 During gameplay, various features will be enabled based on the current difficulty dip switch values.

A hidden string can be found in memory starting at A8F in each version. Similar strings are also present in Savage Bees and Gun.Smoke.

This banner only appears on the Japanese version's title screen, right before the demo starts. The Kanji and romanized text could translate as "Absolute fusion!"