Side by Side Special

Side by Side Special combines all cars and tracks featured in the two Side by Side arcade games, the predecessor to Battle Gear games, into one whole package, with some secret bonuses thrown in. Given the car and color choices of the JDM cars featured in the game, as well as the default high scores in two of the tracks, the game can be said as an unofficial Initial D video game. 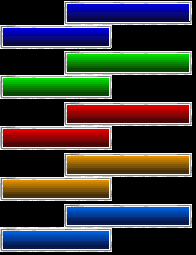 English course difficulties exist and gets loaded into the VRAM, complete with larger boxes to contain them. It seems that Taito had prepared for an international release for the game, since the arcade games also did; the English versions of Side by Side 2 use Beginner, Expert, Professional, Ace Driver, Special (in that order) as course difficulty labels. Normal might have been used in English version of the first Side by Side game to refer to the Summer course.

Interestingly, the "DEATHMATCH" text, used to refer to time trial races in the English version of Side by Side 2, does not exist at all, for some reason, either as a text or in graphics.

Some unused text strings are loaded into the RAM, all mentioning car names. Some of the cars had different specifications compared to what appears in the game (for example, the Mitsubishi Lancer Evolution IV that appears in the game is a GSR trim rather than RS, and the Honda NSX is the regular model instead of the NSX-R version). In both cases, there is also an obviously blatant Initial D reference, since the Fujiwara Tofu is mentioned by name.

Some of the cars featured in this list, namely the Lancia Delta HF Integrale (the car's chassis number, L31E5, is mentioned in the credits as belonging to planning/direction staff Hiroyuki Sako), Honda Odyssey, Subaru Impreza WRX STI Version II, and Honda Accord Wagon SiR never appeared in any of the Side by Side or Battle Gear (the succeeding series to Side by Side series) games, although the Mitsubishi Lancer Evolution III does appear in the Battle Gear games.

Note that Nissan Silvia is mentioned twice; one of them might be possibly for the S14 model. However, only the entry without the manufacturer mention gets carried over to Special 2000.

All the no-show cars are trimmed out, and the typo fixes to the Taito-branded secret cars (more on that later) also apply in the unused text.

Versus mode is mentioned amongst the game mode select text at 0x6D138 (SBSS) and 0x70194 (SBSS2K). The game lacks support for two player racing, either through the second controller port or link cable.

The last two seconds of the game's opening movie (which is totally not a Ryosuke Takahashi vs Seiji Iwaki race) following the fade to white contains a Taito copyright notice on the lower right, unseen because the game goes to the title screen after the fade to white. 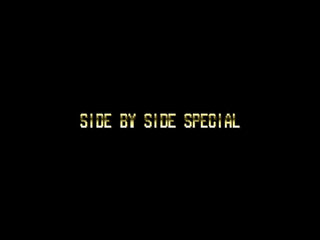 For July and October courses, the track names correspond to what it refers to in Side by Side 2 rather than in Side by Side Special. See the Oddities section for details.

For some reason, the course months of the July (night) and October (autumn) courses (originating from Side by Side 2) are switched around in Special. This was not fixed in Special 2000.

In addition, when racing in night tracks, the shading colors of the digital part of the speedometer and gear indicator becomes red in Special 2000. (There is another revisional change here: the "READY" text is rendered using in-game font in Special 2000, instead of an unique graphic)