The second game in the SimCity series. In addition to improving on everything that was in the original, it adds an incredible number of new features and swaps the top-down perspective of the original for an isometric view.

Among other things, the Debug menu allowed testers to invoke the special disasters not listed in the Disasters menu. 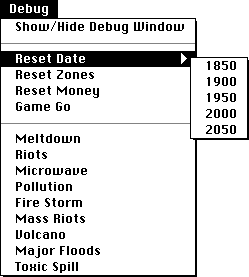 A separate, enormous menu was devoted to testing each type of newspaper article.

There's no apparent way to activate these; the relevant codes from the PC version do nothing on the Mac.

These menus were removed altogether in version 1.2.

The 1.1 patch comes with a list of its improvements, which is reproduced below:

There's also a new quasi-ending: if the year is at least 2051, and your city has at least 301 launch arcologies, they'll take off into space and refund the money used to construct them, accompanied by a pop-up announcing that "the exodus has begun".

The Read Me only cites three new features: PowerPC native code, support for the Urban Renewal Kit, and African Swallow Mode (which fast-forwards the game as fast as your computer can possibly go). Subtler changes included some modifications to the credits: