Skunny Kart is a Super Mario Kart clone clone, sharing an incestuous relationship with its parent clone, Wacky Wheels. Both games were based on the earlier Wacky Kart prototype, the source to which had been left at Copysoft on a demo disk. 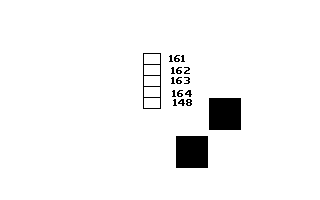 As in Wacky Kart and Wacky Wheels, the slight ebb and flow of tides on the beach tracks is achieved by cycling through colors in the palette of the file BEACH.PCX. However, the actual image stored in that PCX, seen above, is never actually displayed to the player.

This relatively boring sprite is stored along with the other "track object" (i.e. obstacles, items, etc.) sprites. The text reads "Kart" and "pos".

Beginning at 6C109 in the game's executable is text presumably intended for the game's testers. It may still be active in the game, but the game is quite stable, so it's hard to say. Regardless, the developer probably hoped users would never come into contact with the message.

After the message is a pretty standard error with room for variables for the game to fill in about its state at the time of the crash.

Though not unused, it's worth noting that many of the game's assets were cribbed from prior works. The most obvious example is the Wacky Kart prototype on which Skunny Kart is semi-legitimately based (see that article for more detail and comparisons), but the sound effects notably feature a number of generally poorly edited voice clips from Bart Simpson of The Simpsons ("Aww, man!"), Looney Tunes' Bugs Bunny ("What's up—") and Porky Pig ("That's all, f—") and even Arnold Schwarzenegger as The Terminator ("I'll be back"), etc. It's somewhat unlikely that Copysoft actually licenced any of these. Skunny Kart saw the introduction of a new and more complicated archive format as compared to previous games from Copysoft and the Wacky Kart proto; baseless speculation suggests this may have been implemented to hinder the curious (or litigious) in investigating these legally suspect assets.

Additionally, all of the game's original music can be inferred to have come from the Wacky Kart era, based on their filenames: WKLOOSER.HSC, WKTRACK1.HSC, WKTRACK2.HSC, WKTRACK3.HSC, WKWINNER.HSC. Seifert's original Wacky Kart HSCs (not used in the extant prototype) differ only slightly from the final Skunny audio.