Sky Adventure is pretty much Sky Soldiers reimagined as a...different shoot 'em up.

Some debug features are enabled if the game is able to write to address 0x00074 in the main CPU. This isn't possible to do in the retail game, since that space is used by the exception vector table, but was probably possible in development versions. Place this cheat in MAME's skyadvnt.xml cheat file to bypass that check: 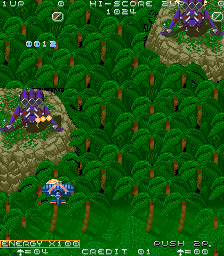 NOTE: This is supposed to be toggled by 2P Button 3, but no such button exists on the retail unit. The MAME cheat changes it to 2P Start.

Most of the HUD graphics bank is left over from Sky Soldiers, including these still-unused flags.