Sorcerer's Apprentice is an Atari 2600 game based on the famous segment from Disney's 1940 film, Fantasia. It was part of a planned series of Disney games for the Atari 2600, but ended up being the only one published after things fell through. It seems to be based off the engine of Dumbo's Flying Circus, and as such shares quite a few similarities with it.

Not to be confused with the Nintendo DS game based off of the 2010 movie. That game's name has an extra "The" at the beginning. Very important. 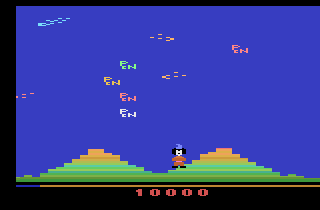 Sorcerer's Apprentice even shares the same hidden credits as Dumbo! Scoring exactly 10,000 points (or any multiple of 10,000) will turn the stars into the initials of Peter C. Niday, the game's programmer.