Soul Blazer is the first in a spiritual "trilogy" of action-RPGs for the SNES. It was followed by Illusion of Gaia and Terranigma.

The Enix logo shown before the title screen was changed from white to pink.

While the font remains the same, the logo text has switched from blue to a more blazing orange to go with the title switch. The sword has also been moved down into the space formerly occupied by the title's Japanese rendering. As a bonus, a giant ugly "TM" has been added beside the title, which even appears in the dramatic opening title scroll.

In addition to these more obvious changes, the title screen can only be skipped in the Japanese version. The other versions require the player to wait for the animation to finish and the copyrights to appear before they can continue to the save select screen. This was probably done so that Nintendo could remind everyone that Soul Blazer was LICENSED BY NINTENDO (another addition to the US and European versions' title screen).

File names in the Japanese version can only be five characters long. In the English versions, this limit was raised to eight characters. The LV display was also changed to LEV.

Because of the limited screen space, the menus were somewhat modified in the English versions.

The status screen was split in two, with your collected souls on a separate screen: 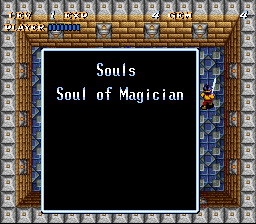 In the Japanese version, it was easier to just lure the boss to one side, then run up the middle bridge and hack away.

Deathtoll's flame attack was changed so that you could safely stand between the flames without being hit. This doesn't necessarily alter the difficulty of the battle, just makes it different. For some reason, the graphical details on the platform you stand on were altered as well.

The Mermaid Queen was given a different colored bikini top in the US and European versions.

In Magridd Castle, the Floor Stalker enemies were given different sprites for the US and European versions.

In the Japanese version, Lisa's face has a more anime-like appearance. In the US and European versions, her hand sprites are not used, so she is never seen praying.