Say, there's a bunch of junk on here from Space Quest 1!

Strange, you don't recognize most of this. This conglomeration of curious content was clearly cut from the completed game.

Either that, or you've taken one too many whiffs from cleaning solvents.

Press Alt+D to enable some debugging functions. These features are disabled upon entering a new room. 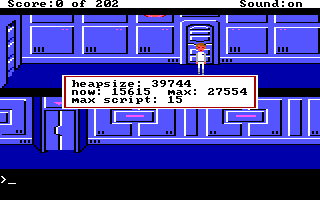 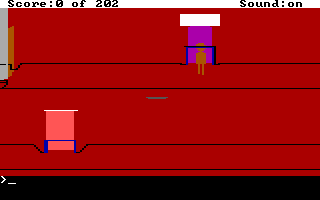 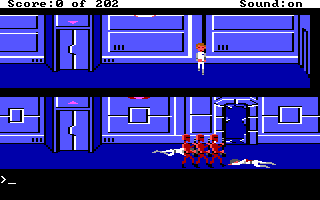 If you return to the room you start in (logic 2) on the upper level, there's a 21% chance that three guards show up marching on the lower level. The same code exists in logic 4, but due to a coding bug they never show up (you'd have to enter from the right side with an Y coordinate less than 80; and in that room the exit is placed lower than that; and repositioning the player occurs after this step). It is possible to get them to show up anyway with the debug mode, by repeatedly teleporting from room 4 to room 4; at this point, they'll promptly get stuck behind one of the corpses.

This appears to be an early version of the wandering Sarien logic used on the Arcada. There are only two messages in this logic compared to the final logic's five. Notably missing are the footstep messages that are used to alert the player.

This logic was removed from the game's resources in Version 2.2.

Three static Sarien guards. Their design here is a lot beefier than their finalized look.

The first three frames of Orat swelling up from eating the can of dehydrated water aren't used. It's a little animation of Orat actually examining the can before eating the thing. Apparently, at one point, you could GIVE CAN instead of throwing it at him.

Note the yellow eyes on Orat. He has green eyes in the final game, but these frames were never updated to match.

Picture 63 -- removed from Version 2.2 -- is an older version of the Star Generator keypad. The only difference is the lack of an enter button.

None of these items have descriptions or graphics. They're just kinda there.

Item ID: 01 (Versions 1.0x & 1.1a only)
This item was removed entirely from version 2.2. There's no code in the game that references it. All that was ever done (or is left in the code) is the object name and ID.

Item ID: 0D (Versions 1.0x & 1.1a), 20 (Version 2.2)
Presumably this would be given to the player when they bought the correct ship. This is referenced once in the back lot of Tiny's Used Spacecrafts, where it would remove Tiny from the screen if it was obtained.

Item ID: 14 (Versions 1.0x & 1.1a), 15 (Version 2.2)
This item actually has a unique use message!
When the player types PRESS BUTTON or PRESS CONTROL BUTTON with this item in their inventory, and the player is not in the Deltaur's Star Generator room, the following message is displayed:

You press the button on the
remote control but notice
nothing different.

It's possible that this item was accidentally created in the object list. There's a Remote Control item in the game, and its only use is in the Star Generator room. It probably should have used this code.

Item ID: 23 (All versions)
Probably a joke item. On the room to the right of the starting screen, you can type GET LINT and get a special message, but this item isn't added to the inventory.

In Leisure Suit Larry in the Land of the Lounge Lizards, Larry starts the game with pocket lint in his inventory, with its description stating "why is this stuff in every adventure game?", so it was probably an inside joke at Sierra.

The sounds in this game are programmed with three sound channels and a noise channel. In most computers, only the first two are heard.

Both the two-channel and four-channel (Tandy) versions of these unused sounds are provided here.

Do you want an exhaustive (bordering on obsessive) look at the changes between versions? Here you go.

The shop "Droids R Us" was changed to "Droids B Us" after Toys "R" Us threatened Sierra On-Line with legal action.

Action: Grabbing the shard of glass.
Version 1.1A: GET GLASS
Version 2.2 Adds: GET MIRRORED GLASS, GET CHUNK GLASS, GET WIND SHIELD 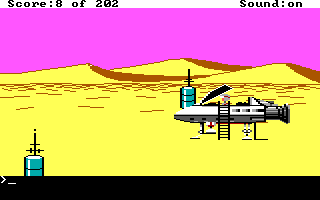 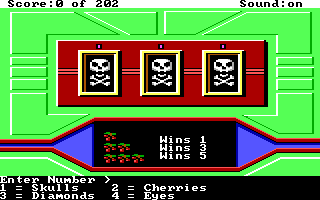 Version 2.2 adds a way to cheat at the slot machine. Type in "HOLY SHIT" (You can replace Shit with any other expletive the game recognizes) to bring up a slot machine menu. This will configure the next pull of the slots.

The text for this menu was present in earlier versions, suggesting that this was a debugging tool that got added back in due to player complaints.