Spelunky is a critically-acclaimed Roguelike platformer that will teach you to fear frogs and self-sacrifice. There's also a Windows-only freeware version.

There's a graphic for a lit-up crush trap, presumably for use in dark Temple levels, but the trap remains unlit in-game.

A "2000m" sign, intended for the screen that transitions between stages; however, as the final boss level is at 1900m and its exit leads directly to the end sequence, this sign is never seen.

A debug graphic used to display the location and color of light sources in the level during development.

This icon was used in the console versions to indicate purchasable playable DLC characters; however, these are included as standard in the PC release. 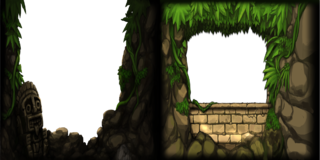 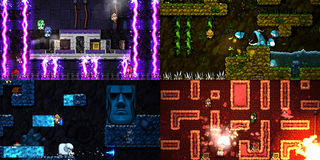 Two images, nagscreen.png and trialscreens.jpg, for use in the PSN and XBLA demos.

In strings.pct, there's a journal entry for a type of trap that is never seen in-game:

The trap was possibly implemented, but ultimately abandoned at a very early stage of the game's development. The design would have been similar to an arrow trap, but with a flamethrower-style effect of around three tiles' range, cycling between an on and off state.

In strings.pct there's alot of text referring to purchasing items that you can't purchase normally.

These items aren't purchasable in the game normally.