Spider-Man 3 is the official video game based on the 2007 film of the same name.

Originally we might seen female punks in Apocalypse gang (renders from official strategy guide could be found in Prerelease Info page), but in release version Treyarch deleted them from the game. But we also could notice female punk thugs in PSP/PS2 versions of this game.

Also we could notice that 8 punks missions were planned. Despite the audio numbering (where last mission has 5th number) game archives has right numeration with 8th order of last mission.

Apocalypse-1. The Catch of the Day

In unused cutscene citizen talks about "Ditko Chroming" warehouse which is located near the river coast in Chelsea area. 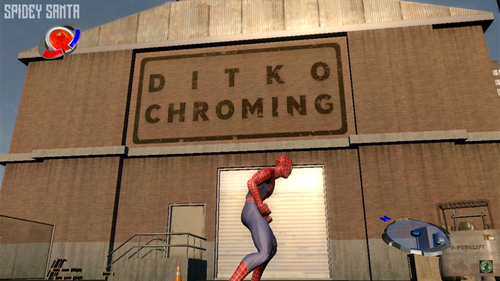 "Hidden Evidence" should been in the Ditko Chroming warehouse interier according to the unused cutscene audio from the first atomic punk mission. We could investigate it with Debug Build. Ditko Chroming's interiors named J15I01 and J15I02.

Also some strings could be found in GANG_ATOMIC_PUNK_02.XEPACK:

Below is a reconstruction of this mission, using the above strings and some unused audio (found in VOICE_CA02_EN.XEPACK):

Also, "Playing Cards" sound that presumably could play during stealth. In GANG_ATOMIC_PUNK_02.XEPACK was found animations of punks playing cards.

The first part of this mission has no differences. We pursue to punk car, then we heard about one more car in Chelsea by police radio set and flies to that area. When we got it we could seen deleted cutscene of our first Apocalypse Boss meeting:

After fighting with punks we could seen another deleted cutscene with Punks Boss:

Mission starts with cutscene where Peter angries on Betty and then Robby ask Parker to travel to City Hall and takes mayor conference photos:

Then we flying to the City Hall and see cutscene where Punks Boss takes mayor as hostage:

After fighting with punks we flying to gang hideout and see the cutscene:

We fight thugs, find mayor, and see another cutscene with dialogues with mayor and Apocalypse Boss:

After bossfight we see the final cutscene that has no differences.

Black Cat was planned to be a character in the game, with Sparta mercenaries as the main thugs and a combat mech as the main boss. An unused demo soundtrack is present as soundtrack_blackcat.xessb.

While the disc has archive files for all six missions, only 1, 3, and 6 contain any useful info.