Splatterhouse: Wanpaku Graffiti is a deliciously-messed up, SD version of Splatterhouse. And it has Dracula doing the dance from Thriller. 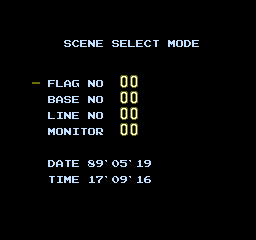 Flag no. changes your damage flag. This is mostly a bitfield:

There seem to be hardcoded values:

Base No. and Line No.

Base and Line modify what stage and section-of-stage you're on, for the most part.

Base 00 holds the intro cutscene and all of the stage intros. Any entry past Line 07 causes the game to die a vicious, painful death. And crash.

Base 02, Line 01 is the fight against two flying knives and cooked chickens from stage 1.

Base 02, Line 04 is the bathroom enemy from Stage 7, but without proper graphics and inside the mansion. After beating it (or just ignoring it and going through the door) you're dropped into the entrance to the sewer itself.

Base 02, Line 06 is the second part of stage 2, climbing up with blue spiders annoying you.

Base 02, Line 08 is more spider platforming hijinks, from Stage 3.

Base 02, Line 0A is the chestburster boss from Stage 3.

Base 02, Line 0C is another cabin interior from Stage 5.

Base 02, Line 0D is yet another cabin interior from Stage 5.

Base 02, Line 0E is the third cabin interior from Stage 5, with the screaming paintings.

Base 02, Line 0F is the last cabin interior from Stage 5, with buckets falling on your head.

Base 02, Line 11 is from the final stage, Hell House. A cultist drags you into a skull and makes you think "oh shit, I died."

Base 02, Line 12 is from the same stage, and it's the scene that follows you going "oh shit, I died." Chainsaw room mk2.

Base 02, Line 14 onwards are black screens/crashes.

Base 03, Line 00 is the first part of the sewer level. BE GARBAGE OF CESSPOOL.

Base 03, Line 05 onward are black screens/crashes.

Base 04, Line 02 is the first really annoying platforming section of Stage 6.

Base 04, Line 03 is the second really annoying platforming section of Stage 6.

Base 04, Line 04 is the THIRD really annoying platforming section of Stage 6. Now with damaging water!

Base 04, Line 06 is the same as Line 02, but you drop in from the ceiling. This is what happens if you miss a jump in that sequence.

Base 04, Line 08 is a HARD CRASH then the game resets itself.

Base 05, Line 01 is the "waking up from cultist death" screen from Stage 7, right before Chainsaws mk2.

Base 05, Line 02 is the purple fly room after the chainsaws.

Base 05, Line 04 is the same area, but assuming you exited from the bathroom.

Base 05, Line 05 is the bathroom fight, but this time on the CORRECT stage.

Base 05, Line 07 is the room in Stage 7 with annoying holes in the floor and GoddamnBats.

Base 05, Line 08 is the return of the screaming paintings in Stage 7.

Base 05, Line 0B is the first part of the ending cutscene, which plays straight through.

Base 05, Line 0C is the ending cutscene from talking to the director onwards.

Base 05, Line 0E is a picture of Rick and his girlfriend running towards Hell House, with the text "ひげきは2人におそいかかる。" (A tragedy befell two people late one night.) followed by the ending. This is the second part of the extended ending that comes with getting the hidden crystal balls.

Base 06, Line 00 is the beginning of the secret Japan stage.

Base 06, Line 01 is the inside of the Japanese castle.

Base 06, Line 02 is the second part of the Japanese stage.

Base 06, Line 04 is the start of the secret, in-fucking-furiating Egypt stage.

Base 06, Line 05 is the inside of the pyramid. Watch out for trapdoors!

Base 06, Line 06 is the second part of the pyramid interior.

Base 06, Line 07 is the final part of the pyramid interior.

Base 06, Line 08 is the Egyptian princess that gives you Secret Crystal No. 2.

Base 06, Line 0A is a picture of Rick and his girlfriend on a hill, with the text "幸せは2二しかし..." (These two people were happy, but...), followed by the end credits. This is the first half of the secret ending.

Base 06, Line 0B onwards (and all subsequent Bases) are black screens/crashes.

I have no clue as to what this does. Any takers? 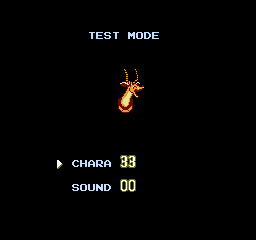 By hitting Select in Debug Mode (or holding Down + A + B on Controller 2 and hitting Reset), you get TEST MODE!

CHARA cycles through the enemy sprites, and SOUND cycles through the sound effects. Fun fact: there are two copies of the Thriller-alike from the Dracula bossfight. Sound 0E is the music itself, with drums and all. Sound 23 is the version used for his exit, and doesn't have drums.

Only text strings remain of this mode, as nothing in the game refers to this text.