Now with even more breakage than in Splatterhouse 2!

Stored alongside the Options menu text, starting at $5015 (JP), are the following strings:

It's likely the debugging features were meant to be accessed in the Options Menu itself, but the code that would theoretically have accessed these strings was likely removed (see below, on removed cheats, to see what I mean about these clean removals). The patch codes I give below will jump you into these screens by selecting EXIT from the Options menu; the low byte of the patch code values are the screen mode numbers. 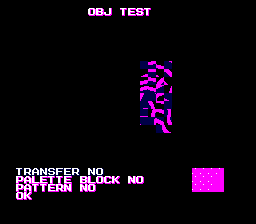 Use 479C:0009 (JP) (Gens/GS). This is identical to the OBJ Test from Splatterhouse 2, right down to having the same controls, though the weird drawing bugs are all gone and in their place... the numbers don't show up correctly (using garbage tiles instead of number tiles; the number tiles are in VRAM). Hit Start to return to the Options menu (which is how I eventually decided to go with doing this through the Options menu). 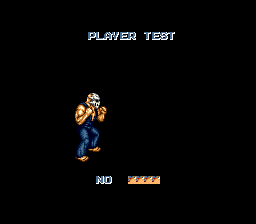 Use 479C:000A (JP) (Gens/GS). This is a simple player sprite animation test. Use Left and Right to change the direction Rick faces, Up and Down to select an animation, and Start to go back to the Options screen. (Do A, B, and C do anything? TODO). As with the OBJ TEST, the sprite number shown does not use the correct tiles (they are in VRAM).

Nothing in the title screen code ever refers to these strings and there does not appear to be any code left that lets you select a stage and life count outside of the password system. In fact, the list of title screen submodes (which starts at $286C (JP)/$292E (US)) is mostly comprised of pointers to the first string on the list (the PRESS START BUTTON string) (starting after the submode that represents the title screen main loop), which may indicate that the code was completely removed from the game but the screen mode list was not updated.

The game is mostly the same between versions, even down to the English text (which explains the Engrishy moments) though the US version added text explaining the basics of the game after you start. However, some tweaks were made to the gameplay when the game was localized outside Japan. Most notably, the spin kick was made more powerful, and the button inputs for special moves were switched around. Moves that subtract from Rick's powered-up form no longer do so. Time limits are shorter. The name also changed from Splatterhouse Part 3 to just Splatterhouse 3. In the emulated ROM version in the reboot, the digitized cut-scene pictures were completely redone.