The image "background" (stored in root\Sceneart\menu01.omt) is likely a placeholder for the final titlescreen. It is even in the same OMT-file as the images used for the final one. Differences between the two versions are the "Chum Bucket" text, which uses a different font, and the lack of the game's logo in the left-up-corner. 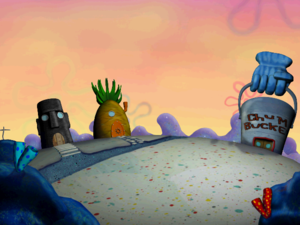