Spore is one of Maxis' most... unusual ideas. Sadly, thanks to a long and rocky development period, it quite possibly has more unused content than used.

A variant of the parts palette bar, as seen in several promotional videos from 2007. Interestingly, unlike the final version (layouts_atlas~!editorPartsPalette.spui), this version has no arrows to see the next/previous set of 9 categories. It also lacks a number of blocks related to the selection effect present in the final version, but if the videos are any indication, this is probably just because it had no such selection effect. It also has a ComboBox, which was visible in the videos, and appeared to contain some kind of debugging list, so this feature was likely not intended for the final game. There is no paint mode counterpart to this piece of UI, as it was probably overwritten completely for the final game. In fact, the debugging ComboBox may hint that the only reason this SPUI wasn't overwritten as well is because it was used as a separate debugging version, although this has not been proven. 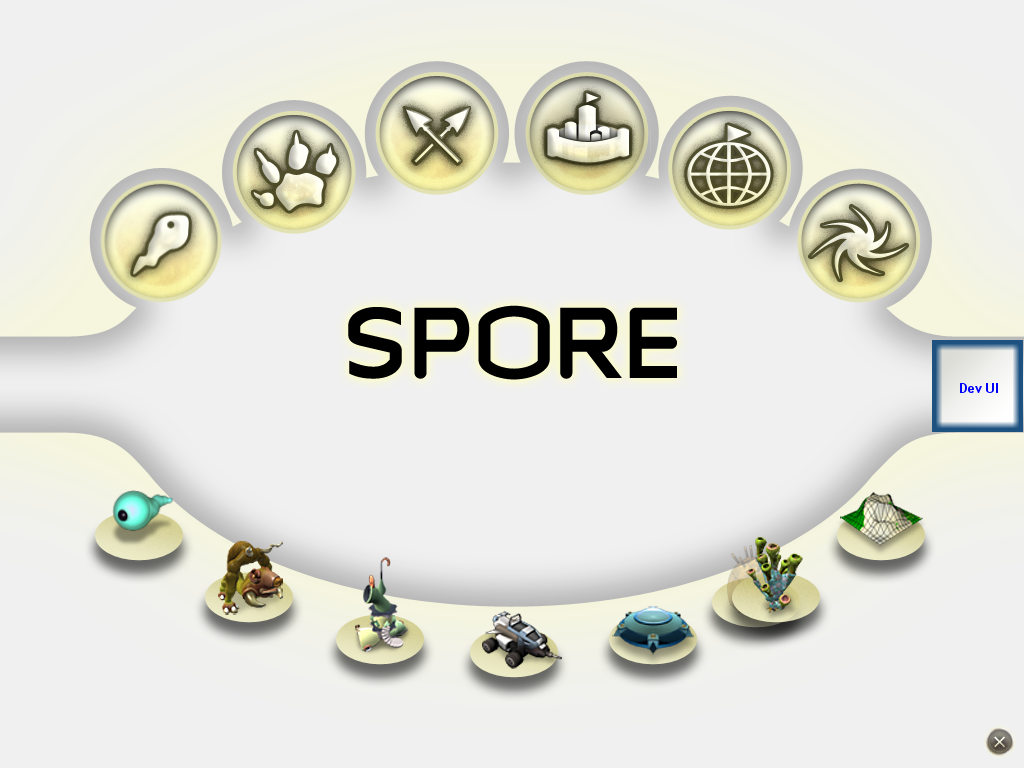 The iconic Editor/Stage selection screen from the E3 2006 demo. Given the mention of E3 in the filename, it seems this SPUI may well have never been planned for the final game at all. The "Dev UI" button seen on the far right does not appear in-game. 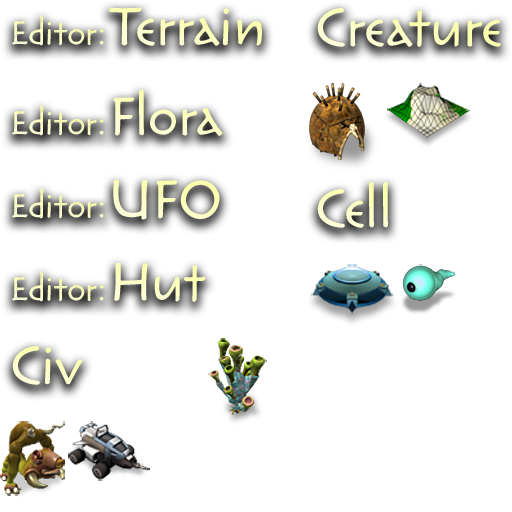 This texture contains several extremely early labels and icons for some editors and stages. Note that some of these editors are not present in the final game. These textures are used for the E3LaunchScreen, listed above. 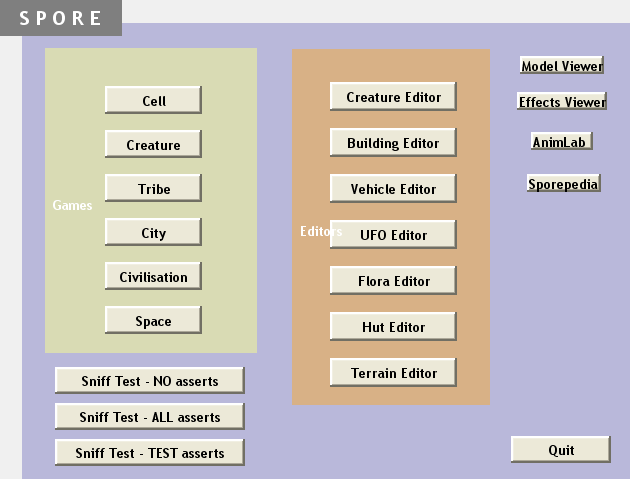 Unlike E3LaunchScreen, this SPUI is very unpolished, and does not appear to have been intended for players' use. 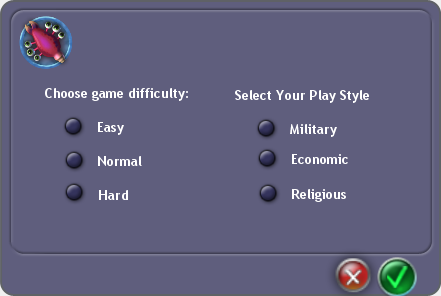 This unused SPUI appears to be an early (or development) version of the interface for starting a new save planet, presumably at Civilization stage. The icon, however, clearly features a Cell, oddly enough. 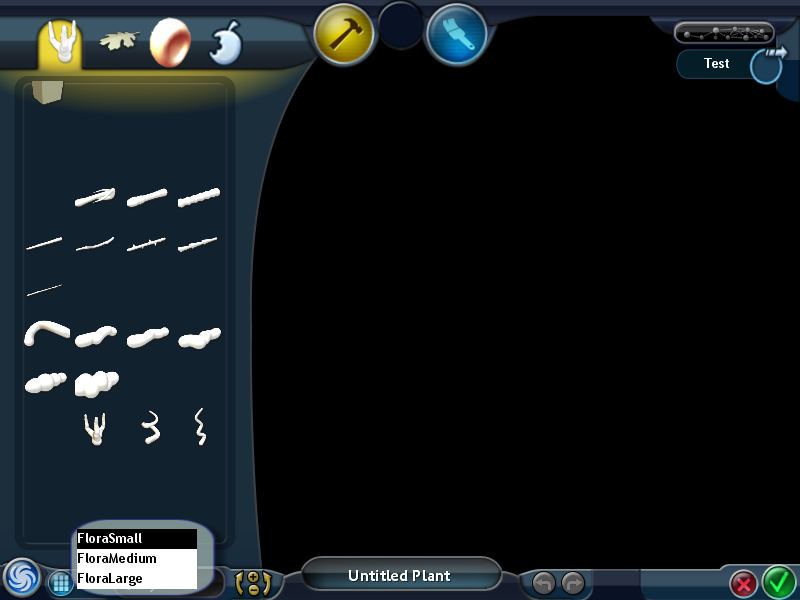 There is a Flora editor which went semi-unused in the final game (it is technically used for the Sporepedia Viewer, but not as an actual editor), which can be accessed by running SporeApp.exe with the command line option -state:FloraEditor. It is very glitchy and doesn't allow saving of your... "creation" unless a part with the "fruit" ability is present.

Also worth noting that if you do save your plant, the plant may crash the game. If the Galactic Adventures DLC is installed, this can be avoided with the "gaprop" tag, although due to a bug in the tag's behaviour, all other tags must be removed. This bug is not specific to flora. 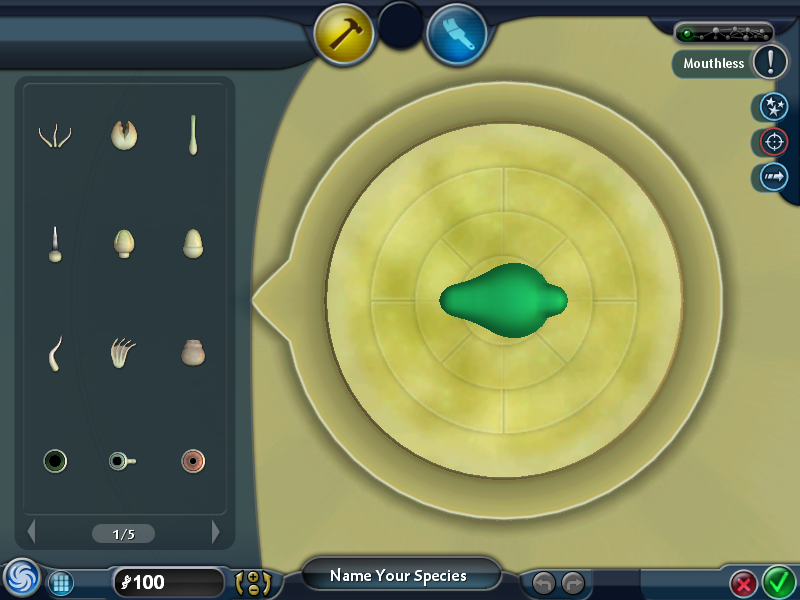 There is also a Cell Editor thought to be meant for the game's Developers. It can be accessed by running SporeApp.exe with the command line option -state:CellEditor. It features several variants of each of the standard parts, with the exception of the three eyes - instead, there's a fourth eye, known as "Long Eye".

There is also an unused, albeit incredibly strange, 'Cake Editor'.

These appear to be test animations tied with the Physical song.

The song is Olivia Newton-John — Physical, this is tied to these unused Physical animations.

The song is The Muppets — Mahna Mahna, this is tied to these unused Mahna Mahna animations.

There is an unused cell that never appears in the Cell Stage, seemingly as a test for different cell parts. Interestingly, most of the parts on it are placed in midair slightly offset from the main body, and slightly asymmetrically at that. Also interestingly, the flagella parts on it have bulbs on the end of them. These are actually the same flagella part from page 4 of the "Extended" Cell Editor (cell_parts~!cl_movement_flagella_04) but with different values for the part's normally-inaccessible morph handles.

The template for the paint sprites that appear in the Cell Editor is an actual cell, called "PaintSwatch".

The fin parts in the Creature Editor are Detail parts in the final. However, unlike every other Detail part, their internal hashed name does not start with the prefix ce_detail_, but rather ce_movement_, which is the prefix used for feet. This is a leftover from the scrapped Aquatic Creature Stage, where fins would have had actual use as movement parts.