Sprung was one of the Nintendo DS' launch titles, notable for being one of the few western-developed dating sims released commercially in the United States. The game puts you in the roles of both Becky and Brett, two twenty-somethings on vacation in the mountains with their wild cast of friends.

The game is generally text-based and can be considered both an adventure and a dating sim.

An unused scene with the description - "You meet Kiki in a bar. Get drunk." can be found within the game's files. Another scene, "Love in the Lift", is also unused; this is likely an earlier version of Brett's first scene "Lift off!" and is shown in a screenshot in the game's booklet. It has the description "Learn to score with the ladies".

The game has unused dialogue involving a successful method of inserting laxatives into Conor's drink in Becky's level, "Serving the Freezing Dish". The level's description mentions this as one of three successful ways to complete the level, but it is impossible in-game. This additional path also includes a new "golden line". There is also unused dialogue for items that are impossible for Becky or Brett to ever receive in their respective paths or never have an opportunity of using on certain characters.

Amorous Action is an item used by Brett in-game and has the effect of kissing whoever you're talking to. Becky never receives this item, but still has programmed dialogue for when it is used. 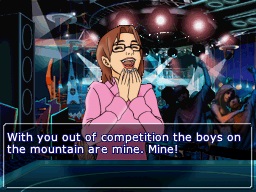 When used on Erica as Becky, she will say these things on each consecutive use until a GAME OVER screen is reached.

When used on Alex as Becky, she will say the following things all at once, but this won't lead to a GAME OVER screen.

Leanne only lets you use it once, leading to an GAME OVER after the following dialogue.

Shana also only lets you use it once, but has two lines of separated dialogue.

Kiki doesn't say anything after the first use, but says this on each consecutive use.

Conor will say this and then continue the conversation.

Elliot will say this and then continue the conversation.

Brett will say this and then continue the conversation.

Sean will say this:

Lucas will say this:

Danny will say this:

Rabbit's Foot is an item that can be received by Brett in his first level. Becky never receives this item, but still has programmed dialogue for when it is used.

Leanne leads to an immediate GAME OVER after the following dialogue.

Shana continues the conversation after the following dialogue, but takes the Rabbit's Foot.

Using the item on Conor will initiate dialogue between Becky and Conor and then resume the normal conversation.

Brett doesn't take the item despite his dialogue.

Using the item on Sean will initiate a conversation between Becky and Sean and then resume the normal conversation.

Danny takes the item upon giving it to him.

Completely different from the other Apartment music in the game, it remains unused in both the game and the music section. Its name indicates that it was to be used when characters were displaying sad emotions.

An alternate version of the former. Features slightly different instrumentation.

Intended for disappointment on the Ski Lift, evidenced by its name. Features completely different instrumentation from the final Ski Lift themes.

Intended as a boredom theme in the Ski Shop, evidenced by its name. Features completely different instrumentation from the final Ski Shop themes. 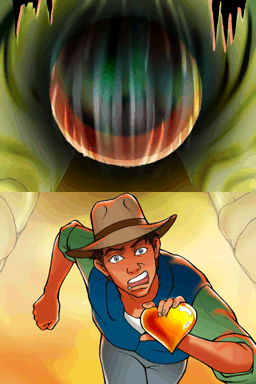 Sprung's Image Gallery section has 52 images that can be unlocked by collecting items throughout the game and completing scenes. With normal gameplay, however, only 51 images can be unlocked. This image, titled "Capture the Heart", is completely unobtainable without the use of cheats. It was likely meant for a late scene in Brett's path.