William the Kid has imprisoned all the dairy cows in the world in his fortress on the sleepy little Greek island of Acidophilus, and it's up to Spy Fox to save them. Can he do it? Probably, but it may be too late for the Eurozone anyways.

Like nearly every Humongous game, this one has subtitles that can't be turned on in-game. They're activated by adding the line TextOn=1 to the hegames.ini configuration file.

The game has debug console output for all sorts of bits and bobs. The easiest way to view it is to run the game in ScummVM and set the debug level to 0 or greater.

Regardless of debug mode configuration, pressing < (Shift+,) jumps back to the previous room from where you exited from, and also fast mode can be enabled by double-pressing the key in the starting area. Likely enabled for testing that the developers forgot to remove. This debug feature also returns in Pajama Sam 2: Thunder and Lightning Aren't So Frightening.

Another mainstay of Humongous games, there are several debug rooms that allow control over most aspects of the game. To enable them, add either TransBigCheater=M or WhosABigCheater=I to the configuration file (the last letter is case-insensitive, so "m" or "i" respectively will also work). 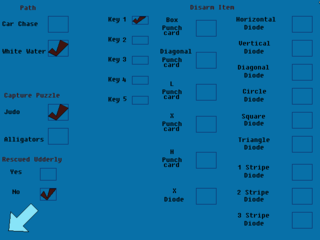 Accessed by pressing the C key. This allows the current game path to be modified. 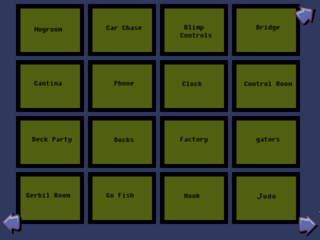 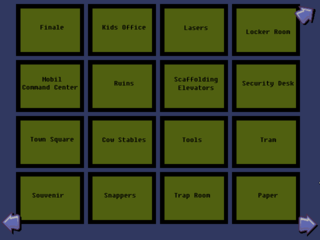 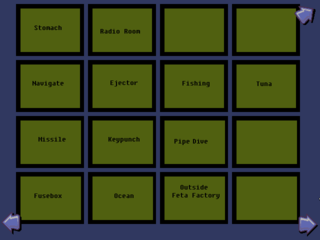 Accessed with G. Clicking a room warps Fox to it. 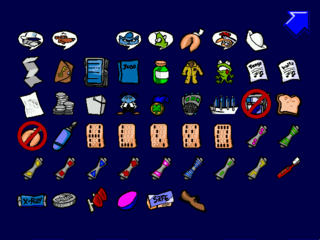 Accessed with I. Clicking on an item places it in the inventory.

Happy Fun Sub seems to have suffered some quite significant content cutting.

This odd slip of paper, internally named "inv-spyjail", appears alongside the other items in the Item Select debug room. It's marked as a usable item and has its own cursors for that purpose, but only gives default "can't do that" messages no matter what it's used on. Hovering over it in the inventory yields a description:

This suggests that at one point, this paper contained the coordinates for the Spy Jail. Possibly this was replaced by the Spy Watch coordinate display, or Fox was intended to use it on the robot pilot instead of entering the coordinates himself.

Earlier in development, the fortune cookie containing the code needed to enter Kid's fortress was a talk balloon, as evidenced by its internal name "inv-spycode-balloon" and its positioning between talk balloons in the inventory debug room. It seems it was also supposed to be a usable item instead of just a reminder, indicated by these use cursors. The original idea might have been for Fox to gather the code by talking to townspeople, but there's nothing else to show for it.

A few of the game's many tracks aren't played anywhere.

This game has quite a lot of unused dialogue, much of it the result of programmer error or simple design oversights. This video shows off most of the material described below.

To see the material in-game, apply this xdelta patch to the original US release of the game. For more details and specific changes, see the Notes page.

These lines should play when Fox uses the Chicken Knuckles on the Beet Bliss, but don't due to a scripting error. This issue was fixed in later releases.

Meant to play when Fox tries to buy more Chicken Knuckles by using the drachmas on the cantina sign. Bea's first response is for if Fox still has the Knuckles, and the second is for when he's gotten rid of them by solving the alligator puzzle.

Captain Drydock has a number of lines that are supposed to play when Fox gets on the S.S. Winaprize, but never do.

These may have been intended to play when the map on the S.S. Winaprize is clicked.

This line is programmed to play if Fox is standing next to the lever the first time the player clicks on it. The problem is that the only way for him to get there is to click on the lever while he's in his regular position, which triggers a different piece of dialogue and prevents both lines from being triggered again.

The script that handles Mr. Big Pig's responses to being asked about Cock-a-Doodle Fu is quite badly bugged in the original release of the game.

First, the audio for one of Fox's lines, labelled "You think Bea knows something about cock-a-doodle-fu?" in the subtitles, is incorrectly filled with a duplicate of the line "With the power off, it's safe to snatch a diode", from a completely different part of the game. This xdelta patch will fix this line borrowing from the UK version. Second, Big Pig's last set of lines is skipped over entirely, causing further attempts to ask him about the subject to immediately terminate without any dialogue.

These are the lines that are supposed to play, with future questions selecting from the other dialogue at random. One of those issues were fixed in the UK and later releases of the game respectively.

Based on their content, these were meant to play when Big Pig is clicked during a Go Fish match, but he uses the same lines whether a game is going on or not.

Could have been used any time Fox needs to draw a card, but other lines play instead. Strangely, this is stored in the object code for the sixes' face graphics. None of the other cards have an equivalent.

One of six sets of conversations is supposed to play at random when Monkey Penny is clicked after rescuing Mr. Udderly, but because of a scripting error the game always plays the first one, leaving Monkey Penny with a strange obsession over William the Kid's overdue library books.

Should play between "Here's the jet's fuse panel" and "And, there are some missing pieces" only when Fox opens the fuse panel after already pressing the missile button, but doesn't because the game checks the wrong variable. 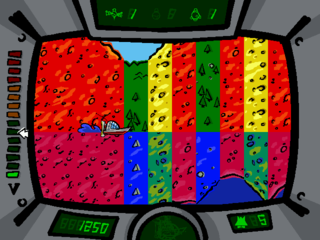 Adding E3Demo=90997 to the configuration file enables a special mode that was presumably used to demo the game at E3 1997.

When this code is enabled, the game skips the William the Kid intro scene but otherwise proceeds normally up through the Mr. Udderly puzzle. Once the puzzle is solved, the game plays a few otherwise-unused lines of dialogue as Mr. Udderly falls onto the ice, then flashes the Spy Fox logo and resets.

Spy Fox in Dry Cereal was re-released twice, in 2002 and 2007 (not counting the accidental import of the UK dub).

The 1997 version shows the standard Humongous logo with no website. The 2002 version first shows the Infogrames logo with its "color hysteria" animation, followed by the flip-book version of the Humongous logo. The "It's a Junior Adventure" screen was cut entirely.

The 2007 version was given a newer and more bland logo screen with no sound effects, and the Junior Adventure logo was again cut.

Nearly all of the re-releases exclude Johnny's second piano waltz and the William the Kid escape theme, the latter of which was replaced with the Happy Fun Sub title theme.

Later versions of the game have a slightly different Happy Fun Sub title screen, sporting a much smaller logo with some recycling logo-like arrows around it.