Spyro: Shadow Legacy moves away from the platforming that Spyro is so well known for to tackle the RPG genre. The game is considerably darker in tone compared to previous Spyro games, and some could say that it paved the way for the reboot.

Little did anyone know that this would be the last time anyone would see "Classic Spyro" for over a decade. 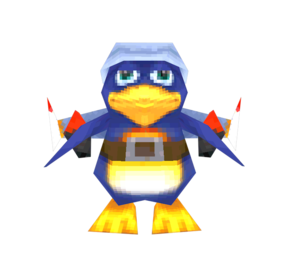 A model of Sgt. Byrd as he appeared in Spyro: A Hero's Tail. 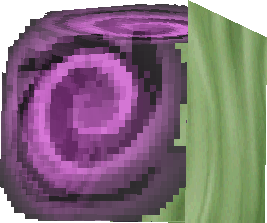 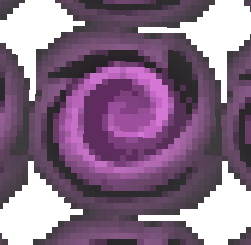 A flat model that uses a Shadow Realm texture. Like the model above, the texture is stretched out.

A debug room can be accessed with the following Action Replay codes in all versions. Hold Select+R in front of a house then press X to enter it, to be warped to the debug room.

In the center of the debug room are five phase pads, two holes (one large and one small, the latter for use with the dragon egg cheat given by Kaitlin after obtaining at least thirty dragon eggs), a butterfly, a mushroom, one of each gem (using the original models instead of the sprites found in the game) and Sensei, who repeats the same text he would do as if you were playing the game normally.

The bottom right room is empty, but the room next to it contains several characters performing their walk cycle across the room, reappearing at the beginning once they have finished.

Finally, at the top left are some colored columns with numbers that increase, along with their height.

There are two unused crystals in the game, although there is no description as to what they do.

One is Crystal of Undefined, which can be seen in the prototype. It is a light blue crystal.

The second, with only a large icon left, is the Crystal of Elasticity. This crystal was dark green.

As seen in the Debug Room, the gems were originally going to be models instead of sprites.

There are several books found in Dragon Village and Dragon Shores. There are other books in the dialogue file to suggest that the books were going to expand to the other locations in the game as well.

Some unused text can be found in dialogue_English.txt. /e is the coding used to highlight text.

It seems as though Spyro was going to speak for himself at one point, which would make sense considering that his own portrait is used only once throughout the entire game.

Several placeholder texts are still present, including text for a fifth shop. Another placeholder, "Wilderness - Dock" is also here, but used (albeit in the wrong location - in Treetops).

Scattered in the text file are some dialogue placeholders which never got used.

It would appear as though one of the wizards, presumably Longorin, was originally going to teach Spyro how to teleport instead of Tomas.

A signpost intended for what fans have called "Lost Fleet" can be found, revealing the true name for the area.

A shop entry for the sunglasses, which can only be found in Dragon Village and has no icon for purchase.

At 00x6AF33 in Tales_bin.rom is a line that shows us where Sgt. Byrd would have met Spyro in the game had he actually been included.

Scattered about in Tales_bin.rom are some notes left by the developers, mainly telling each other when the assets were added. In addition to these, many others are listed as "TBD".

Some files intended for a Sims game have been left in.

The internal name for Mountain of Magic is WizardPeak, a level from the first game.

Bunny Bayou's internal name is LostFleet, a level from the third game.