Star Battle is based on Galaxian, which Commodore did have the license to, but only for Japan. It was taken off the market because of this, so it's a little tough to find.

Immediately after Commodore Japan's copyright is a programmer credit for Satoru Iwata, hidden between 0x29A and 0x2F6:

If the name "Satoru Iwata" sounds familiar, it's because he was the CEO of Nintendo of Japan and Nintendo of America from 2002 to 2015. 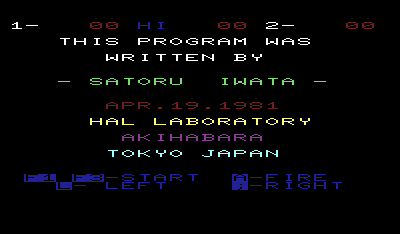 There is a bit of code intended to display this text when both Shift keys and the Commodore key are pressed on the title screen, but it was commented out for unknown reasons. It can be re-enabled with the below patch.