Star Trek: Starfleet Academy Starship Bridge Simulator is both a decent Star Trek game and a decent 3-D combat simulator in its own right. Players assume the role of a Starfleet cadet who commands various simulators and completes various missions assigned to them. While some are scientific and objective, most of them involve blowing stuff up with your weapons. 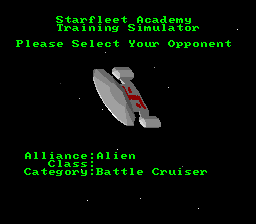 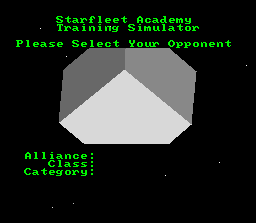 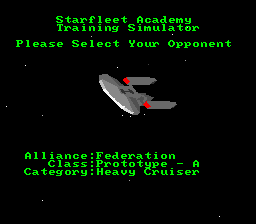 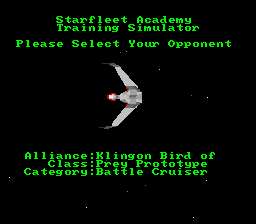 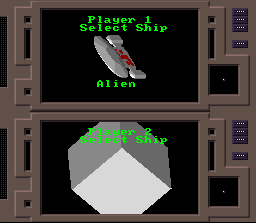 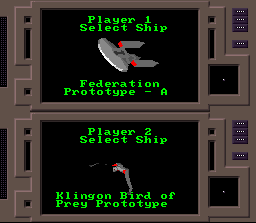 In Combat Training and Two Player Training, a number of starships are left unselectable. The game uses two bytes for what ships you can select: one is for "Combat Training, player", while the other is for "Combat Training, computer" and "Two Player Training, both players". Normally, only the first seven ships can be selected (the restriction was likely put in place to limit how many Bridge layouts had to be designed). The maximum selection values are 11 and 17, respectively. Any value higher than these will cause the game to freeze when the simulation starts.

There are button combinations to remedy some of the problem, but a memory editor will be required to access the remaining unused ships for the 2nd value.

In Two Player Training, enter the above code, then have Player 1 select a Gorn Cruiser and Player 2 select a Romulan Phoenix. The Phoenix must win the fight. After the battle is over, go to Combat Training and the Federation Prototype-A (1st value #11) should be available for selection.