The first of two NES games based on the 1977 movie, released only in Japan, best known for the fact it was released on a silver cart and that Darth Vader turns into a scorpion in a sand crawler in the beginning of the game.

An 'exit' icon that was intended for the subscreen but never used. Function is likely to be the same as selecting a blank space therein in the final.

Holding Up and pressing A 8 times on the game over screen allows you to continue at the cost of 30 Force points. 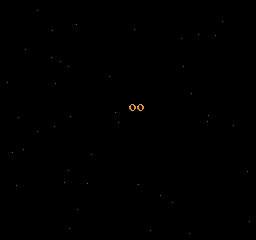 For this code to work, you need to have a joystick connected to the Famicom's Expansion port. At the title screen, hold Up on the Joystick, Down on controller 1 and press Start.