The NES Steins;Gate is an added exclusive bonus to the Switch version of Steins;Gate: Elite, which is an NES ROM packaged in a fancy emulator. The game itself isn't too bad, and has a surprisingly good soundtrack. It can also play quite well on real NES hardware. 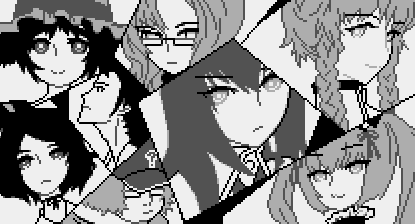 Stored near the ending graphics is a graphic featuring all the main characters of the series. It lacks an associated palette. Its presence right next to the final ending graphics would suggest it was supposed to show up during the ending. The game instead cycles through the areas the player has traversed, ending with a graphic of Makise Kurisu.

An odd sound effect which sounds similar to the cursor selection sound, but extended with what sounds like other sound effects.

An incomplete arrangement of "Skyclad Observer", from the PC game of the same name. This was likely used for the credits, or the title screen. However, a completed version exists, which adds the missing vocals. Interestingly, the conclusion for the missing channels can be drawn due to the complete version using the MMC5 expansion sound, while the "instrumental" version uses MMC3 (which lacks sound).

The game generates an 8KB save file on most flashcarts and emulators (including Steins;Gate: Elite's own emulator), which is mostly empty except for a small amount of data. The game also prints "steins" at the beginning of the file.

This is odd since the game lacks a save system of any kind.

Certain ROMs of the game, when loaded into Famicom Disk System development tools (such as the Sunsoft Tile Editor), will provide the file names of each CHR/PRG bank. Paired with the unused song's missing channels, it seems that the game changed mappers through development, going from FDS, to MMC5, and then back to MMC3.