A mostly original fighting game by Hummer Team that predicted the release of the real Street Fighter IV...but that one doesn't have fighting bunny girls.

Unused (and possibly earlier?) head and hand variants as well as unused body tiles can be found in the graphics bank for the walking animation. The unused body does fit with the legs in the fifth sprite of the animation and the third variant of Bunny's head. It appears Hummer Team decided to reuse the same body and head from the fourth sprite of the walking animation however. The other two head variants appear to be earlier sprites of Bunny and the rest of the tiles for these may have been overwritten or edited.

Found with the jumping graphics; it could've been an alternate jump sprite or another attack.

An incomplete and nude Bunny sprite. This sprite looks like her jumping punch when you jump backwards or forwards but this is in the graphic bank before it. This sprite also used a different head that's similar to one of the heads above.

Unfinished tiles for the legs and feet on Bunny's sprite when she's hit in the body. This was either meant for this sprite specifically or she originally had a different sprite for this state. In the final version, she reuses tiles from another hit sprite.

This sprite is located in the same graphics bank as her card throw and spin attack. This may have been an earlier sprite of her card throw or it was meant for an entirely different sprite. The coloring on her body appears to be a bit strange however. The legs on this sprite were reused in the card throw animation.

In several graphic banks, there's various unused sprites of Chunfo walking. The last one is included in a bank with some of his other walking sprites but isn't even finished.

In one bank, there's a duplicate of the upper half of his standing punch with a set of legs nowhere else to be used. This might've been an alternate crouching punch.

An outline of one of Chunfo's first standing punch frame. Only the upper body tiles remain.

This frame isn't used in any animation; it looks like this could've been part of an attack.

Several unused leg tiles located near one of his walking animation graphic banks.

Sprites of Stalong doing a Sonic Boom exist as well even though he uses different special attacks.

Stalong doing a Flash Kick but once again, it's unused because he uses different special attacks.

Unfinished sprites found in the special attacks graphic banks. The 1st sprite looks like it could've been used for a back flip while the 2nd one could've been an additional frame for his jumping knee attack. Interesting enough, he appears to have boots here.

An outline which resembles part of one of his jumping knee sprites.

In the game, it's impossible to make Musashi dizzy. However, he does have a sprite for this as well as the star that flies around his head. Unlike the other sprites, it's possible to view this by changing the value in 008F to 28 while fighting him.

Two unfinished bodies can be found in the graphics bank that contains his walking animations.

In the graphics bank that contains sprites of him getting hit in the body, these tiles can be found. They don't appear to match up with any of the final sprites so the rest of the graphics for these may have been overwritten. 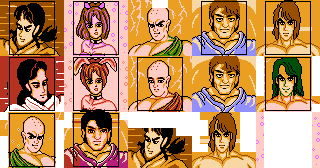 The portraits for the original fighters seem to be much bigger than the ones used in the game. The clones also contain the tiles for the backgrounds but they were never intended to be used since some of them aren't edited to match the character and some tiles even appear missing for them. Chunfo appeared to have originally used Moon's background for his portrait but ended up getting a whole new portrait instead. There's also several portraits of the original fighters that seem to lack the border as well. (However, Cliff is missing several tiles and it appears most of Bunny's tiles were completely overwritten by the character select's logo, leaving only the background left.) The portraits in the top row were later used in The Legend revision with some of them using different palettes.

Hummer Team took some graphics from Tokkyuu Shirei Solbrain but not all of them were used. The whole font is included in these graphic banks.

Both of them are missing part of their foot when they're dizzy.

Second sprite of her walk animation is missing part of her foot but the tile still remains in the ROM and was even reused for a later sprite.

His dizzy sprite in the game is missing part of his foot.

The second frame of the animation of Chunfo getting hit in the face reuses the legs from the first frame, but it forgets to carry over a tile for his foot.

Stalong's whole foot is missing in his standing kick.

Stalong's missing part of his foot in his crouching kick.

Even though the feet reuse tiles from the other standing sprite, part of his foot disappears here.

The NSF for this game contains some unused DPCM samples:

A short voice sample that isn't associated with any character.

Sounds like a character saying "Shoryuken". In the game, a different one is used probably because it sounds much better.

Also if you change the value in 0701 to 09, you can hear the round beginning fanfare from Hummer Team's Street Fighter II NES port:

The only way to hear this fully is to use the sound test on the options screen. The demos start playing halfway through the track.

The high score screen ends before the track finishes. The only way to hear this fully is through the sound test.

Every character loads up two palettes to be used for their sprites. While Cliff has two palettes, he only uses one for all of his sprites despite his second palette containing a different color. In the ROM file, AA1B to AA1D holds Cliff's second palette which contains white, orange and a reddish-brown. This could've been carried over from Ryu's palettes from Hummer Team's Street Fighter II since Cliff and Ryu share the same palettes and Ryu actually uses a second palette for his feet. Given how Goho Li is a palette swap of Cliff, he does have a second unused palette as well but it's just his first palette repeated. 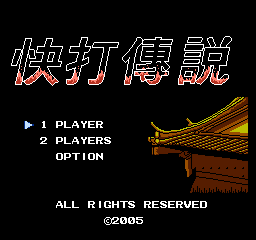 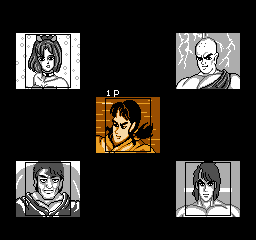 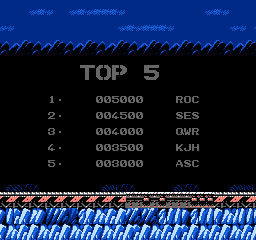 The Super New Year Cart 15-in-1 contains a revision of Street Fighter IV which changes quite a bit:

Graphics for an alternate title do exist in the ROM. The Chinese name for this game does translate into something like "Fighter Legend" which is what the font might've spelled out.

Although the character select screen changed, the graphics for the logo still exist in the ROM. Instead of the Street Fighter IV subtitle, it has a different font that could spell out "Fighter Legend".