Strong Bad's Cool Game For Attractive People is a five-part story arc in which you go around being awesome while wearing a very convincing Strong Bad costume.

Each episode has two ranks that are normally impossible to obtain. The first rank is for getting a score higher than the maximum score for that episode, while the second rank seems to be used for getting an impossibly high score through cheating. Some of these ranks repeat through different episodes.

The only exception to this system is in Strong Badia the Free, where it's possible to obtain the rank "Uber-Pope" through a scoring glitch in one of the mini-games. What should be that game's highest legitimate ranking goes unused instead. 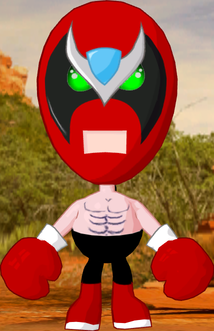 There is a shirt called "Ab-Abber 2000 Shirt" that is unobtainable during Strong Badia the Free, Baddest of the Bands, and Dangeresque 3. It can be accessed in the Windows version by adding the 32-bit value "shirtmuscles" to the game's registry. It even has its own dialogue when Strong Bad puts it on. The shirt is a refrence to the Sbemail "suntan", where Strong Bad invents a device to draw abs on one's body called the Ab-Abber 2000.

"Look at all these real muscles! Thanks, Ab-Abber two-thous-and! For best results, never shower again."

The voice files from the Wii version's tutorial are also present.