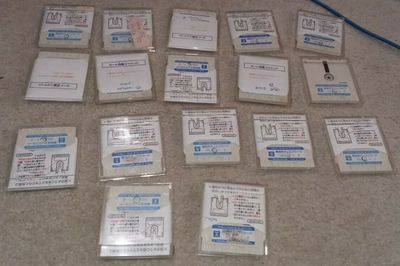 This page covers a set of 19 Sunsoft FDS dev disks that were dumped and released on Lost Levels. These disks were used during the development of several Sunsoft games and contain some early graphics from them. This page shows all the extracted graphics and some insight into the development material.

A picture of 17 of the disks can be seen in nashvillearcade/DreamTR's auction (see right).

While running, the program goes into a loop indicated by the routine below: 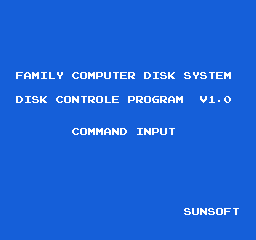 At startup, the program asks you to input a command and waits for RAM addresses $E0 and $E1 to be modified. The available commands are:

...However, every time a command is put in the message "DISK ERROR 24" appears.

The editor contains a total of 12 maps, but all of them appear empty because the tile editor has a unique storage system: each file you load can be either a CHR file or a BG file, but never both. To view the maps correctly, you have to look at a CHR file's graphics then go to the map that you want to view correctly. Since the PPU doesn't reset when you view a map, the map will use the graphics of what you last saw. 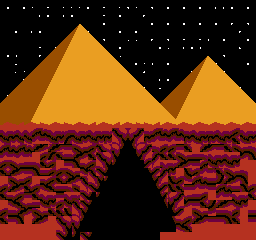 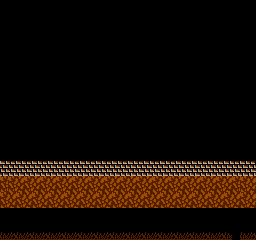 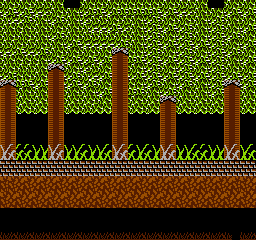 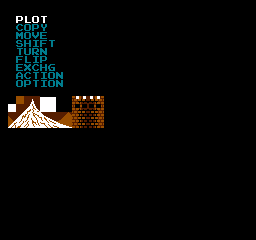 One file contains graphics for mountains and castles, but there doesn't appear to be a map that corresponds with the graphics. Likewise, there is one map that doesn't have any corresponding graphics. All the maps don't seem to belong to any games and are probably just demos.

These data disks contain early graphics and maps from mostly NES games, with the exception of Trip World for the Game Boy. These disks cannot run on their own. In order to view the assembled graphics, you have to copy and paste the files from these disks into the Tile Editor's ROM.

Contains graphics and mockups for Journey to Silius.

Evidently, much of the intro was given a proofreading and rewriting before release.

Jay was given a snazzy hairstyle in the final game's cutscenes. The text mentioning the fate of Jay's father was touched up to be less awkward here, too.

The "floppy disk" actually looks more like a microfloppy diskette in the earlier version, instead of resembling a magneto-optical disk in the final. (The reflection effect graphics are still in the early version's CHR bank.)

The message from Jay's father was split up into multiple screens in the final game.

"Operation SSS", an early title for Journey to Silius after being itself changed from "The Terminator".

The space graphics were later used in the final for the background of the last boss battle.

Part of the moon is cut off on the title screen. The image above shows the missing parts of it.

Composed of level mockups, cutscene mockups, and sprites for Gremlins 2. 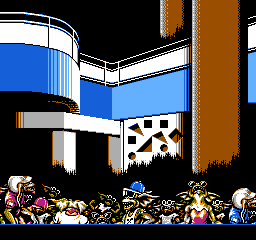 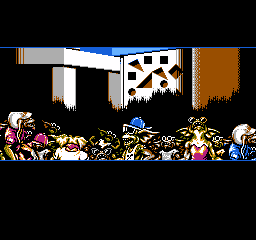 The green Gremlin in the final throws pineapples instead of cabbages. Also, the last gremlin with the googly eyes doesn't appear as a boss or enemy in the final game, although a similar one does appear in a cutscene.

This rather crude ship exploding animation can be found on dev disks G-18 and J22, but the graphics are corrupted on the latter disk. All of the files on the disks have names; they can be named after the person who named it, or can be named for what it is. Oddly enough, this file is named after a person called Ryan; people's names for files except for this one are named after a Japanese person.

This disk contains the sprites of the main character from Trip World for the Game Boy.

Contains graphics for Gremlins 2 and a Superman game. 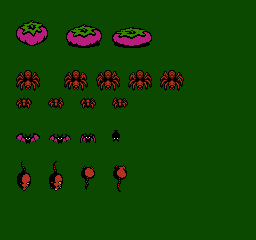 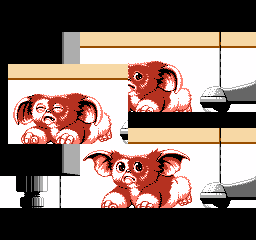 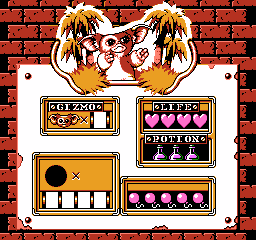 Rather crude graphics for a Superman game that presumably became Sunman.

Contains an actual game. By copying the disk's data onto Side B of Adian no Tsue, you can see that it is in fact Step Drill from "Super Boy Allan".

There is only one difference between the two versions: Step Drill on the dev disk contains a minor musical error which has the FDS channel disabled during part of the title screen music. Resetting the game will fix this.

Freeon Leon from Ufouria: The Saga and O-chan from its Japanese counterpart, Hebereke.

According to this file, Freeon Leon and O-Chan were created simultaneously.