This enemy is loaded into VRAM whenever the player enters Poka-Poka Island (World 1), Hiya-Hiya Island (World 2), Puka-Puka Island (World 4) or engages in a random encounter on the World Map. His placement in memory is right between the most common monster types (the bird and fox, for example) -- this raises the question as to why he was not included: his sprites appear to be complete although the exact palette could not be located (the most appropriate one was chosen for this screenshot, shared with the crab enemy). It is currently unknown whether or not the boar can be placed in an existing map or not.

Unlike most of the action stages in Super Adventure Island II, the Inn's (and King's chambers) tilemaps are all located on the first background layer. Because this layer has no transparent tiles, the unfinished sky background is never displayed (on background layer two with a priority of zero).

Consequently, turning off the background layer also reveals an obscured sprite: Tina's face from the "stage completed" cutscenes. This is due to the fact that the Inn map is used as a general-purpose location: upon defeating a boss, you are warped to this location during the cutscene and then warped back outside of the completed stage.

The boss' chamber has a lock on both scrolling axises, but forcing the camera upwards reveals an extended portion of the map in which the tree's branches climb much, much higher into the foliage.

Much like the above revelation, the boss room from the second stage also has an extension—but this time to the right of the screen behind the mammoth boss. It is an exact replica of the regular chamber save for an extra layer of snow on the ground.

The miniboss cavern actually has a floor which is obscured by the foreground layer (the standard grey stone tile). This holds true for both minibosses (the lizard and dog) because they share the same map layout, albeit with a different palette.

The game contains a debug menu which was disabled in the final build by writing a second title screen pointer over the debug menu pointer in the menu table. To access the menu, boot the game with the following game enhancer codes active:

Begins a new game on the selected file. Any progress will be overwritten upon choosing Save from the menu.

Continues a previously saved game from the selected file. This option may restore old games which were deleted, but not overwritten (deleting a file via the main menu simply marks the file as empty).

Warps you to the appropriate stage and its boss in sequential order. While there truly is no "Stage 6", this option accounts for the two final bosses, the Phantom and Space Demon/Scorpion, respectively. When warping to bosses, the player's inventory will be overwritten to include every weapon, armor, shield, spell, and equipment piece available.

A different set of game enhancer codes are required to access a debug sound test which isn't connected to the main debug menu. 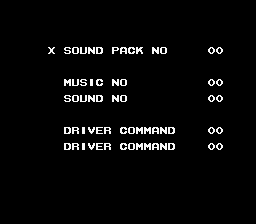 The variable above corresponds to the package in which the music track is grouped into (see below).

Because most stages only use a single song (save for Waku-Waku Island and other cutscene maps), playing track 0 or 1 is sufficient in finding the song you are looking for after changing the sound pack number. Going outside the valid range of music tracks for the selected sound pack will cause the game to hang.

Plays the specified sound. This may or may not be connected to the sound pack number.

Does not appear to do anything.