Apparently Konami couldn't decide whether to market this as a "Super" version of the original Castlevania or as a sequel to the NES trilogy, so they decided to do it both ways and gave it the confusing title of Super Castlevania IV. 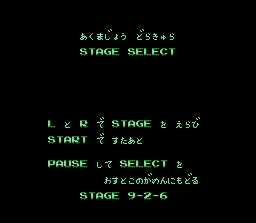 Menu code for an unused but functional stage select exists at SNES address 009A63-009B97. However, it doesn't appear to be connected to anything. The following set of Game Genie or Pro Action Replay (PAR) codes can be used to access it. The instructions say "Choose stage with L & R, start by pressing START. Pause and then press SELECT to return to this screen."

Advancing directly to stage B-4-2 using any stage modifier (not just the stage select) will not load all graphics for that screen as the game expects you to start at the foot of the B-4-1 staircase. Going down the stairs and back up again will refresh the screen and fix the issue.

Present in the ROM is a leftover of bat enemy variant from a prototype build, but it seems to have been cut in the final because they are annoying to deal with. To see it in action in Stage 3 (Cave), change the value at 0x289FA from 0x3F to 0x4B in a headerless US ROM.

No pointers exist for these text strings:

A blood drop on the ground is censored in the international releases.

The different logos are seen on the map screen as well.

It's pretty obvious that a cross has been removed from the huge grave, and if you look at the background you'll see no less than eight more crosses that ended up being deleted. But harder to notice amongst the cross apocalypse is the Engrish "Dracura" on the grave in the Japanese version, which was rubbed out as well.

In the Japanese version, the story is written in white characters whereas the international versions use the available green HUD font instead. While the Japanese story is a retelling of the story seen in the Japanese manual of the first Castlevania game, the English text makes us believe Simon is over one hundred years old in this game.

The stained-glass decoration atop the password screen in the Japanese version displays Jesus Christ and a cross.

The crosses seen on the fields in the background of this stage were all changed into rocks (broken tombstones?) and moss. Also, note the change in HUD font from a unique font to a version of the bog-standard NES-era font. On the bright side (no pun intended), the text was given a shine effect and made brighter and far more visible.

The nude statues in the background of this stage were given clothes in the international versions.

The blood-filled pools and the blood that drips from the ceiling in the Dungeon/Torture Chamber was made green-colored, effectively turning the hazardous liquid into acid.

The blood seen on the spikes was also changed into green.

In the first part of this stage, the coffins in the distant background had their crosses removed.

The coffin graphic in the second part of the stage features yet another removed cross.

Throughout this stage, the very tiny "crosses" on the distant piles of gold in the background were modified. Konami really went to great lengths to get rid of all crosses and cross-shaped accessories (except the Rosary item, of course).

The coffins that attack Simon in various stages had their crosses removed.

For some reason, the sound effects for the upgraded forms of Simon's whip (the Chain Whip and the Morning Star) were altered for the international versions. In the Japanese version, it actually sounds more like a chain.