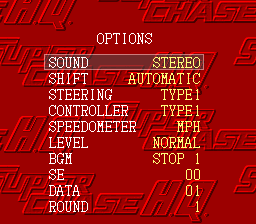 Super Chase H.Q. has a button code which adds a round select and sound test to the options menu. However, for some reason, the code that checks it is never actually called. To re-enable it, use the Pro Action Replay (PAR) codes

then press A, B, X, Y at the options menu. Some new options will appear: BGM and SE play sounds and music, DATA loads a new sound bank, and ROUND selects which round the game starts at.

Present at 0x20B24 is a portion of Kennosuke Suemura's sound driver credit, the full version of which can be found in several other games.