This is what happens when you take characters from Street Fighter, Darkstalkers, and Red Earth, squish them down into super-deformed versions of themselves, place them into a parallel world where they exist together, and have them fighting to collect colored gems while pulling out all sorts of stuff and changing into wacky over-the-top costumes. It's Super Gem Fighter Mini Mix! Also, there's Capcom character cameos in the stages too!

It also has an uniquely catchy soundtrack, which is a special treat for fans when it comes to bringing some Rhythm Heaven and WarioWare-esque humor into this kids-oriented Street Fighter game filled with Capcom characters, and it's also notable for being the only Capcom fighting game with more playable female characters than male.

Hidden in Ryu's tiles is a canned drink that goes unused.

The cat that appears in Ryu's Story Intro has sprites in gameplay, but it goes unused.

Some kind of object that goes unused. It's proper pallete is unknown.

Graphics for this toy dinosaur is hidden in Ryu's tiles, but it is also unused.

SD graphics for Ryu's duffel bag that he carries with him in his Story Intro and Ending is hidden in his tiles! It goes unused in-game though...

This supercharged Hadouken effect for Ryu is hidden in his tiles. It's unsure what they would be used for... but if the unused effect had been inplemented, it would have once functioned similar to the Hashogeki (or even it's "Shin" variant), which became Ryu's V-Reversal move in Street Fighter V, and would later become a special move in Street Fighter 6.

Graphics for an unused attack effect are hidden in Ken's tiles which are unused.

Graphics for a small frog walking are hidden in Ibuki's tiles. 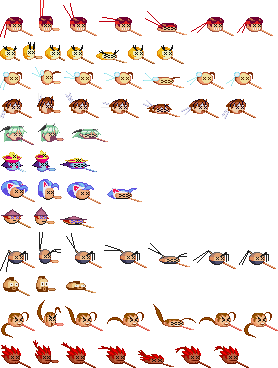 All 12 playable characters have unused mini face graphics for when they are being possessed during Ibuki's Flash/Costume Combo throw in their tiles! These would have been seen if a character has been wall bounced during the throw. Sadly, these are never seen in normal gameplay, as only the first frames are used instead for every character. 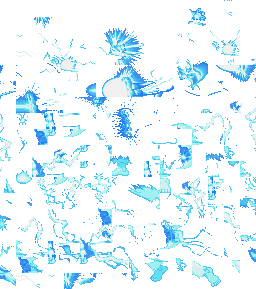 Hidden in Zangief's tiles are leftover sprites and effects of Ryu using his Shinku Hadouken Super Combo from certain Capcom CPS-2 tag-team fighting games (such as X-Men vs. Street Fighter, Marvel Super Heroes vs. Street Fighter and Marvel vs. Capcom: Clash of Super Heroes). These don't match up with this game's SD art-style, but rather the art-style of the Street Fighter Alpha series'. They were somehow being added in by accident, as their palletes are no longer present or correct, so the developers had forgotten to remove them!

Hidden in the tiles for the HUD is this Mobichan from Side Arms Hyper Dyne. It's pallete is no longer present or correct.

An unused filler graphic with text reading "NULL" that can be found many times throughout the graphics ROMs to fill empty space.

These unused filler graphics are also duplicated many times over in the ROM, presumably to fill empty space.

These arrows are hidden in the tilesets for the small text. One of these (the small one facing right) are used for when you enter the Debug Menu.

These graphics are hidden in the HUD's tileset.

In Ibuki's tileset, these unused numbers can be found.

These joysticks and button graphics can be found in the HUD tilesets. Perhaps these were intended for a "How To Play" demo?

This "1" for the "Round" text is found in the HUD tiles, but it isn't complete, as there's no filling in it.

A smaller version of the "Fight!" text used for the HUD that goes unused.

This "Wins" text is found in the HUD's tileset. It would have been used instead of the yellow HUD combo message text that appears ingame when winning a round against another player. 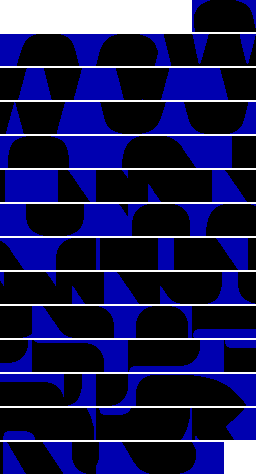 Tiles for this scrolling screen with the words WINNER on it is hidden in the tileset for the backgrounds, although it's only used in the Japanese version of the game on the victory screen.

The Western versions, aside from having a completely different name, also use a slightly different logo when compared to the Japanese version. It adds Chun-Li's bracelet (which made the "O" in "Pocket") and Felicia's pawprint (which was the pattern in the "K") to the background in order to keep the symbols of all 10 starting characters, and the Japanese name of the game on the piece of paper was changed to "Mini Mix". The copyright text at the bottom is also different in the US version, but remains unchanged in European versions.

The Announcer's voice clips were also changed to reflect the game's name change.

In the US version, an Advisory Warning was shown just before the Gameplay Attract Demos. The Japanese and European versions don't have this.

In addition, the Gameplay Attract Demos play out much differently between the Japanese/European and US versions.

The Japanese version features the words "WINNER" scrolling on the victory screen that is exclusive to that version, but this was removed in the Western versions.

As in Super Puzzle Fighter II Turbo, Lei-Lei and Gouki's names were changed to Hsien-Ko and Akuma respectively, and Tabasa's name is changed to Tessa in the Western versions, which is consistent with her prior appearance in Red Earth. The Announcer's voice clips were also changed to reflect this.

In the Japanese version, all fighters have 12 additional Win Quotes, which will be different depending on the opponent who had lost the match to it. They were never translated for the Western version, which makes them all go unused.

The Japanese version has some extra dialog voices for every character's story cutscenes. These go unused in the Western versions.