The third game in the Ghosts 'n Goblins series. Remember to go through this article twice to see the real ending! 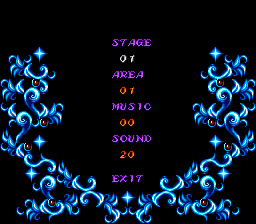 A stage select / sound test is hidden in the game. It can be accessed by holding L & Start on the second controller while exiting the options menu.

An unused transitional frame for the clam enemy.

These heart tiles are found with the rest of the Princess' graphics. Meant to be used when she embraces Arthur in the ending.

An unused, rough tileset, possibly used in a test room.

The European version features a different Capcom logo and jingle on bootup.

The larger title graphic and updated copyright information meant that the Capcom logo had to be removed from the international versions of the game.

The crosses in the first level were changed to ankhs in Super Ghouls 'n Ghosts. Note that the coffins farthest in the background were not changed.

In keeping with toning down religious aspects of the game, the final boss' name was changed from Samael to Sardius.

A spelling error ("backgraund") was fixed in the international releases.

The European version removed certain enemies and obstacles in the game. Perhaps not only a measure to reduce the difficulty, but also to reduce potential slowdown.

The sound effect for the regular crossbow is noticeably different compared to the Japanese and American version.

A bug has been fixed that caused Arthur's actions to be wrong in the attract mode and ending sequence when the button settings were not the default.

In the Japanese version, the crumbling wall in Stage 7 does not block you as it's disappearing.