Compared to the American version, a few strings were changed in the European version - most of them not due to the differences between American and British English.

Mario doesn't say a few lines in the Japanese version:

Princess Peach doesn't have any voice acting in the original Japanese release during the beginning and final cutscenes. This was added for all other versions.

Hard to see at first, a wall texture was moved a bit in the American version.

There's a miscolored "red" wall on that corner in the Japanese version, this was corrected in the American Version.

In the Japanese version, the painting of Jolly Roger Bay is essentially water with some bubbles added in. It also was unique in that it did not have a gold frame (sported by almost every other painting in the game, excluding the Cool Cool Mountain and the Wet-Dry World paintings). In the American version, the painting has been changed and the frame was made golden. For some reason, all versions of Super Mario 64 DS use the Japanese picture.

In the level itself, the Star on the stone pillar is out in the open in the Japanese version, but contained inside a ! box in the American version, probably to make the Star's position not too obvious. Again, all versions of the DS remake leave the star out like in the Japanese release.

When you take the baby penguin to its mother, the Power Star is placed right above the mother in the Japanese version. This was probably a bit hard to collect, so the Star was moved next to the pool in the American version.

When Mario stops touching the tilting platform on the second floor of Big Boo's Haunt, the platform immediately starts to return to its original position in the Japanese version. In the American version, it continues to tilt in the direction Mario was standing for about half a second.

In the original Japanese version, the pole located above one of the four rotating platforms has four small blue arrows around its top, similar to a rose compass. These arrows were removed in all other versions.

Some glitches which were present in the Japanese version have been fixed for the American release.

It's possible to collect more than 999 coins (for instance, grabbing the coins generated by Bowser's fire), at which point the coin counter gets forced back to 999. A bug in the Japanese version causes it to instead try to set the life counter to 999. Since the life counter is only 8 bits, this becomes -25, which is displayed as M25 in the game. (M is used in the place of a minus sign. This is also seen in the debug displays.) If you then try talking to Yoshi without entering a new course to reset the invisible coin counter, the game will lock up. He'll try to give you 100 total lives, but the game will continuously set Mario's life total to -25 each frame, and you'll be stuck on the roof with Yoshi while the "counting" sound effect continuously playing.

The lines of code relevant to this glitch were included in game.c in the July 2020 source code leak. While the glitch has been fixed, the relevant lines have a comment that reads "JPBUG."

Presumably the glitch came from copy-pasting the logic from the first line into the second and forgetting to change one of the variables: 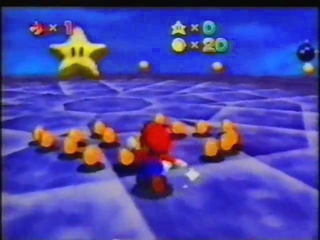 A Japanese re-release that could be primarily considered an "International Edition", as it includes nearly all the changes to the international version.

The only other difference was Mario's taunt when swinging Bowser far away ("Buh-bye!", rather than "So long, Kinga Bowser!", or just "Here we go!" in the original Japanese release), as Bowser is named Koopa in Japanese. The "Buh-bye!" clip is slowed down compared to the sound clip in the DS version and the first and second jump sounds are higher in pitch from their international counterparts.

The "Buh-bye!" clip was sped up and reused for Sleep Mode in Super Mario 64 DS and New Super Mario Bros., and once again when throwing Bowser far away in the former game. 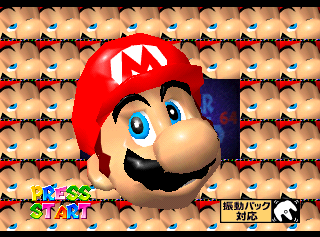 A neat Easter egg was added to the "Press Start" screen: pressing Z makes the background get filled out with images of Mario's face. This is taken from the frame buffer, so the faces move alongside the modeled Mario face. This is still present in the iQue Player version.

The Shindou version insists you can use A as an alternative to B for interacting with things. Non-Japanese scripts are based on the original Japanese version. The localized English version is also present to complete the comparison.

When Mario uses a Vanish Cap or a teleporter, he's supposed to look fuzzy, or like he's dissolving, using an alpha dithering effect. The emulator used in the Wii Virtual Console version doesn't support this, so Mario simply becomes translucent (like a ghost). This is fixed on the Wii U Virtual Console.

The Wii Virtual Console version of Super Mario 64 contains a floating-point rounding error as a result of an emulation inaccuracy. This results in the platforms in Bowser in the Fire Sea very slowly moving up with every cycle.

Because the platform slowly moves up, this allows for a strategy that takes up to three days to be performed involving waiting for the platform to rise at the right height and using a glitch that launches Mario up to the elevator without reaching the pole.

Consequently, this glitch would be exploited in an online speedrunning category titled the "A Button Challenge", where Super Mario 64 is beaten with the most minimal A presses possible.

The version included in Super Mario 3D All-Stars is based on the Shindou Pak Taiou version, with some textures being redrawn in a higher resolution (most notably the HUD and Mario's textures). Certain textures that were based on pre-existing artwork (like the Bowser puzzle in Lethal Lava Land), use higher-resolution prints of said artwork, and most other textures (like the Hazy Maze Cave map) were upscaled using AI. For languages other than Japanese, the text is translated accordingly. These changes are actually patched in on-the-fly as the game runs, and as a result ripping and playing the ROM on an emulator gives you the standard, no-nonsense Shindou Mario 64 experience.

Retrieved from "https://tcrf.net/index.php?title=Super_Mario_64_(Nintendo_64)/Regional_and_Version_Differences&oldid=1359235"
Categories:
Cleanup > To do
Subpages