Super Mario 64 is one of the best 3D plumbing simulators around and one of the three launch titles for the Nintendo 64. It introduced the third dimension to the Mario universe and revolutionized the Mushroom Kingdom.

The game is also notable for the sheer level to which it's been dissected, to the point of getting successfully decompiled and unofficially ported to PCs.

The names are from sm64/data/Anime/aaa in the leaked source code.

Mario has a total of 209 animations, indexed from 0 to 208. Some of these are unused in the game.

File Date: December 26, 1995 Animation #56. This unused animation appears to be Mario putting on his hat faster than normal.

File Date: August 25, 1995 Animation #81. This unused animation appears to be Mario transitioning from freefall to a forward spin. It may have been an early triple jump according to the name.

File Date: December 26, 1995 Animation #84. According to the iQue build's source code, it would have been used when landing from a jump on a Koopa shell.

Animations #98, #99, #100. "Oshin" translates to "nausea". According to the source code, it would have been related to an environmental effect, possibly standing on the ship in JRB. An animation called OshinWalk also exists in the code.

Animation #115. A duplicate running animation that appears to be identical to the normal running animation. According to the name, this appears to be a placeholder for when Mario circles around or when Mario is turning around quickly as it does not appear to have a file associated. TurnCont likely means "Turning Continuously" or "Turning Control". 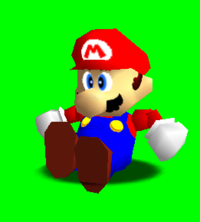 UJumping File Date: December 19, 1995 JumpBack File Date: August 23, 1995 Left: Animation #191. This is the normal side flip animation. Right: Animation #73. According to the source code, it would've been used for side flipping. This early animation (alongside an earlier version of the crouch animation) can be seen in prerelease footage given out during Shoshinkai 1995. 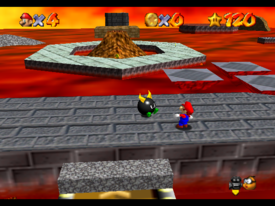 The bullies have an unused animation that depicts them being knocked over after getting pushed back, then getting back up. Could have been used in earlier versions when attacked by Mario. To view this in-game, replace the value in the extended US-version offset 0x882956 with 42A4. The internal name of this animation is BackDown. 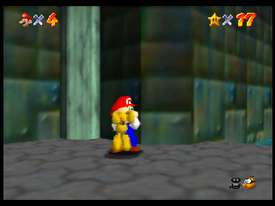 In an official strategy guide interview, producer/director Shigeru Miyamoto revealed that "Mario was able to throw the rabbit" at one point during development. Code still exists meant for when MIPS gets thrown by Mario, which isn't possible without hacks. The code also triggers an otherwise unused animation depicting MIPS bouncing on the ground while recovering from a fall.

To view this in-game, apply the patch above to a non-extended US ROM. The only way to see the unused animation without hacks is if you use glitches to bring MIPS into the water-draining room.

This plant has an unused animation that is similar to the sleeping animation, as seen in the Nintendo Shoshinkai 1995 footage. It features the plant showing its teeth as it sleeps, although it differs from the Shoshinkai demo since Piranha Plant occasionally bobs its head like it is having a sleep reflex. The internal name of this animation is sleep_tmp. To view this in-game, replace the value at US-version offset 0x1D5DF9 with 01AAE4. 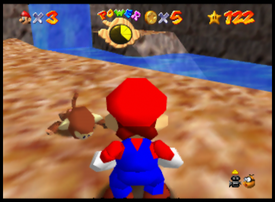 The monkey has an unused animation of falling or tackling. To view this in-game, replace the value at US-version offset 0x15FDE0 with EACC to substitute the head-bobbing animation with this.

Animation #2. This is a slightly different standing up animation that includes a small bounce in the beginning.

Animation #5. This is a broken animation the developers forgot to remove in the final version. It has only one joint in its animation table unlike any other.

Animation #8. A short jump. The only used jump animations are #9 (stop/land from jumping) and #10 (start jumping).

An unused sound for Mario jumping exists. This was used in old prerelease footage (used in E3/Pre-E3) dating to 1996 and was later used in games like Super Smash Bros. and Super Mario Sunshine.

An unused sound for the trapdoor leading to Bowser in the Dark World. It can be heard in footage of the Shoshinkai 1995 build of the game. Technically, it is used, but it goes unheard due to the object having the wrong rendering settings.

An unused boing sound. It may have been intended for the unused trampoline, or for Moneybags.

An unused vibraphone instrument. It was originally the main instrument used in Dire Dire Docks in E3 1996 footage.

An unused, faster version of the snowfall animation, making it look more akin to a blizzard. Can be triggered in a level via the "Environment Effect" option in Messiaen's program, OBJ Importer, or setting "geo_envfx_main" to 3 in a level's "geo.inc.c" file in the decomp. It is purely aesthetic and interacts with Mario in the same way as normal snowflakes do. In the source code, this effect is referred to as "Blizzerd".

An unused effect that, when enabled, causes a bunch of small happy bouncing flowers to spawn around Mario, their spawn point radius dependent on his position. They attach themselves to a level's solid, horizontal surfaces. It is another purely aesthetic level effect that, much like the blizzard, can also be spawned in a level via the "Environment Effect" option in OBJ Importer. Oddly enough, the flower graphic is found among the resources for Lethal Lava Land, which in turn is due to it being grouped with the "bubble" environmental effects, which include Lethal Lava Land's bubbling lava. Setting "geo_envfx_main" to 11 in in a level's "geo.inc.c" file in the decomp triggers the effect. In the source code, this effect is referred to as "Flower".

A number of messages present in the Japanese version were blanked out for the overseas releases, preventing them from being localized.

These lines are found after the rest of the Star names.

This little message is found between the lines "THE SECRET AQUARIUM" and "CASTLE SECRET STARS".

This message comes after the greeting that appears when Mario enters Big Boo's Haunt for the first time. When the unused message is activated, a short Boo laugh plays as the text box appears. While it was translated in the English and French versions of the game and was even translated into Chinese for the iQue Player release, it was, strangely, never translated for the German release. Interestingly, a leftover file in the source code contains older code used for the boos; based on that file, the text was originally used when the Ghost Hunt Boos were defeated.

To view the text in-game, enter the following GameShark codes:

Located at the beginning of the game's text, in both the Japanese and localized versions of the game, are strings for a level select that was present in the playable demo featured at Shoshinkai '95. It is not the same as the functional Level Select that remains in the final game. It was likely only made for the demo, as the source code indicates that the final Level Select was finished before the Shoshinkai '95 Demo; the date is September 6th, 1995, one month before the demo.

The original functionality has been "#if 0"'d out, but has been found in sm64\Message\message.sou in the leak. It works similarly to the save dialogs after collecting certain stars.

In the camera cutscene table, there is an entry that is never called and not associated with a level. According to code labels, it was meant for the Shifting Sand Land Pyramid Explosion sequence, which in the final has no cutscene associated with it. Camera shake data exists for this cutscene, and additional data was found commented out in the Pyramid actor, likely meaning it was intentionally removed.

The decompilation and the iQue build's source code reveal some code that appears to be leftover from when Luigi was intended to be in the game.

In several files in the code, a pointer to a second player struct appears right after the pointer to Mario's struct. Within the code for handling shadows, there exists a switch-case block with two cases, one of which sets a variable to the Mario struct and the other sets a variable to the aforementioned second player struct. In the leaked source code, Model ID 2 is labeled as "Luigi". The camera for locking it is labeled as "2P camera", and it was mentioned in an interview that the fixed camera was intended for a Multiplayer Mode. A section of memory is labeled as "Luigi Animations" in the source code. However, in the final, the section is completely empty. Unused labels mention a third game mode, "Game_Mode2P". Similarly, Player 2 can still control the camera to some extent.