This is a sub-page of Super Mario All-Stars.

All of these stages were ported from the NES version and have not been changed at all. Most of them still have black backgrounds, as the new SNES parallax scrolling backgrounds were not implemented. 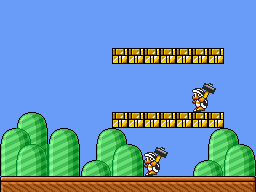 An unused variation of the Hammer Bros. stage that should have appeared in World 7. However, there are no Hammer Bros. on the World 7 map.

This level is reminiscent of 5-3, and contains Spinies and Goomba's Shoe. It seems a little empty when compared to 5-3. It features multiple connecting pipes (5-3 only has one), and Mario starts out on the left instead of the right. This level exits to the standard plains end room.

Has a level concept similar to the one in 3-9, though the actual layout is very different. The pipe on the bottom left leads to a room with another pipe. Taking this pipe leads to the cloud bonus stage, which contains a Lakitu's Cloud. The only way to get to the real exit is to fly over the pipe.

This level shows the first of the unused levels' palette problems. The NES version used a different palette for the floors underwater. The SNES normally doesn't do this, so the floor palette here is glitched. The Blooper enemies also load the wrong graphics.

Another unused level with Goomba's Shoe! This level also features a continuous Starman chain. The hidden Note Block is pretty difficult to get, as hitting it will often drop you down into the pit. Also note the lone coin floating way up in the sky near the beginning of the level.

The cloud bonus room has an incorrect palette for the coins and pipes, which isn't the case for the NES version.

This is definitely an early version of 1-5. The entrance room was changed in the final level to a large slope, and the doors were removed. The final adds multiple paths to the level compared to this level's linear method. The enemy placement here is also a lot nastier, with Piranha Plants in every pipe! The cloud bonus level has not been implemented yet. This level exits to the standard plains end room.

The palette used in the SNES version doesn't appear in any other level.

A collection of large ? Block rooms, each block containing a Tanooki Suit. The only way to explore the rest of these rooms is through hacking (and since All-Stars has a "free movement" debug mode, this is a lot easier than in the NES version). The side pipes exit to the map, while the floor pipes lead to an empty room.

This level certainly didn't hold up well after the port: the palette consists of only two colors, and the large ? Blocks and Tanooki Suits don't load the right graphics.

An interesting stage design. The water bobs up and down like in 3-3. This is the most well-known of the unused levels, as it's accessible from the Start panel of World 1 using a Game Genie code. This hasn't changed in All-Stars!

The path of the wooden platform is still there, but since the background is black it's not visible. The Fire Snakes and Fire Chomps don't load their correct graphics.

An auto-scrolling water level with an ice theme. The Fire Flower at the start is very hard to get before the screen scrolls down. All of the pipes generate water currents. This is the only level in the game with the Golden Cheep-Cheep enemies. The second swarm of Cheep-Cheeps is a bit bugged due to object limitations, so only one or two Cheep-Cheeps will spawn. There's even a unique exit here! That grass doesn't appear anywhere else.

The Blooper Nannies do not load the correct graphics.

A small vertical room with a unique design. You start at the bottom and have to swim up to the top. No enemies here, just water. The upper pipe leads to an empty desert room where the only object is the exit.

Two different water top tiles are in this level: one has the correct palette in the SNES version, while the other tile has an incorrect green palette.

A simple cloud level, possibly intended to be a bonus room. There is a generator here that spawns Red and Green Para-Beetles. The screen bobs up and down like in 3-3. It exits to the standard cloud end room.

Interestingly, this level actually loads the correct graphics for the Fire Chomps!

Another small cloud bonus room. For whatever reason, this has the same object set as the previous level. Exiting takes the player back to the world map.

An early version of 1-6. The biggest differences is the placement of the wooden platforms (in the final there's only one, it's on a track, and it's moved further to the right), and the cloud platforms in the middle of the level. Enemy placement is also different.

There's no ground below the exit, so it's not possible to complete this level.

An even earlier build of 1-6, and barely been started. The platforms and enemy placement are different from Unused Level 11. There's no way to exit this level apart from dying.

This level starts Mario off at a strange place: far above the first platform.

Identical to the last level, except the entire level is lowered by 16 pixels.

A strange level with no enemies or exits. The top of the screen is dotted with odd white tiles (presumably stars), which are actually placed differently than in the NES version!

Something that points to this not being a Hammer Bros. stage is the large amount of layout behind the first screen. There's a Bullet Bill cannon, but there's no object placed to make it fire. The stacked cloud platforms are found in this level and nowhere else, albeit glitched (they were never converted from the NES' 4-color object palette).

The alternate exit from 4-5 is still here, but it's slightly different from the NES version: the wall that's supposed to be to the left of the pipe is missing, and the shrub graphics are glitched because the NES version used the outline palette for this room.

The original 5-1 exit is still in the ROM! However, the exit object was removed from this area.