From The Cutting Room Floor
< Super Mario Bros. 3
Jump to navigation Jump to search
This page contains changes which are not marked for translation.
Other languages:
English • ‎français • ‎русский • ‎日本語 • ‎한국어

The trademark symbol was repositioned in the international versions. The floor also appears one line lower due to some timing changes in the MMC3 IRQ code.

In the Japanese version, a fade-in effect starts when the level appears, similar to the fade-out that normally occurs on the map screen when you enter a level. This fade-in was cut out for the international versions, which reduces the wait time by around one second per level.

In the Japanese version, the player can move before Toad is done talking. In the international versions, the player must wait until the message is completely displayed.

In the Japanese version, getting hit while powered-up causes the player to shrink to Small Mario just like in the first Super Mario Bros. game. Apparently this was deemed too hard for overseas players, so it was changed: Anything above Super Mario reverts only to Super Mario when hit, then to Small Mario. This change makes the short demo that plays on the title screen that explains the general physics of the game "incorrect" in the international versions as Mario is clearly shown being reduced to Small Mario when being hit by a shell when he is Raccoon Mario. 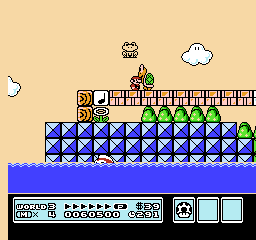 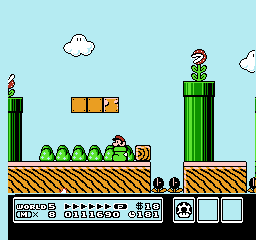 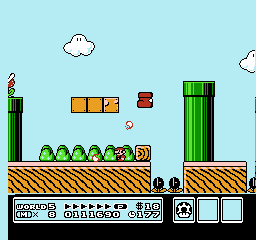 The Japanese version treats Goomba's Shoe the same way as any other suit, in that getting hit sends the shoe flying off and reverts you to small Mario. The international versions retain the visual effect (and correct the shoe color from red to green), but let you keep your current powerup.

The spike room of the World 1 Fortress was changed. The spikes no longer continue past the door, and the gap is now right where the door is. This made the part slightly easier.

The king's chamber underwent a remake in the international versions. The cyan stairs and throne were changed to a more royal-looking gold, and the stairs were lengthened slightly. The orientation of the room was also changed. This led to the removal of the middle pillar, the mirroring of the shadows, the changing of the triangles in the background, and the moving of the back pillar to the front of the stairs. Finally, Mario stands in front of the stairs, instead of on the left side of the screen.

The text boxes got a different palette in the international versions and were expanded to fit the translated text.

In the Japanese version, 5-1 ends in a pipe which you have to enter to get to the final area. In the international versions, the pipe and a Buster Beetle were removed and the level leads seamlessly into the black area. This was done to fix a weird bug that happened if you used a P-Wing to fly over the blue structure at the final area (see Bugfixes).

The first Mushroom House in World 6 gives you a Hammer Suit in the Japanese version. In the international versions, it was changed to randomly give you a Super Mushroom, Fire Flower, or Super Leaf.

In the international versions, one tile was removed off the end of the final ship, allowing players to more easily jump onto the ship should they swim under the fleet. In the Japanese version, the jump must be timed with the ship's wavy motion.

In the international versions, the hints the Princess gives you in her letters received at the end of Worlds 2 and 3 switched places with each other in the localization process. (This would later be corrected when the game was remade for Game Boy Advance.)

At the end of World 2 in the Japanese version, the Princess gives you a hint about the white blocks that are first encountered in World 3.

At the end of World 3 in the Japanese version, the Princess gives you a hint about Kuribo/Goomba's Shoe encountered in World 5.

After the curtains close, it takes a moment longer for them to rise again during the Japanese ending.

In the international versions of the game, pressing Start after the ending sequence will return you to the title screen, whereupon starting a new game will give you a full inventory of P-Wings. In the original Japanese release, this feature is not included, and the game will remain on the final screen until the Famicom is turned off.

One of the most famous differences between the two US versions. Revision 0 is obviously grammatically wrong, as it should say "Miss twice and you're out!" As there is no more space in the text box to do that, the Revision 1 version simply reworded the sentence to fit it in, this change was carried to the European version. The Super Mario All-Stars version uses the Revision 0 text.

In Revision 0, the Princess talks about "Kuribo's Shoe". "Kuribo" is the Japanese name for Goomba, so whoever was translating the name didn't know that the enemy in question had its name changed for localization. In the Revision 1 version, it was renamed to Goomba's Shoe. Nintendo has had an unfortunate tendency to flip-flop between the two names in later games and publications. Just like the text above, this change was also carried to the European version and the Super Mario All-Stars version uses the Revision 0 text.

In the European version, the author of the letter has been inexplicably altered to "Koopa Troopa".

Some bugs were fixed in the international versions: 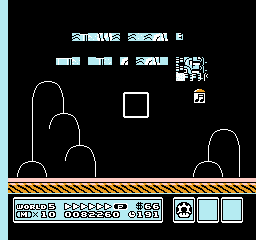 In the original game, the explosion of a Bob-Omb and collecting the "?" Orb dropped by Boom-Boom or the wand dropped by a Koopaling will cause the screen to flash a rainbow of colors. In the Virtual Console release, this was changed so that the screen merely turns bright yellow for a few seconds. This mirrors a change made in Super Mario Advance 4: Super Mario Bros. 3 for similar reasons.

In the original Japanese version, Peach delivered a more generic "Peace has returned to the world" line, while in the international version, her line was changed to a jokier "Your Princess is in another castle" gag. The Western versions of Super Mario All-Stars retain this edit.

The English versions of Super Mario Advance 4 use a line that's more accurate to the Japanese one but refers to the Mushroom "Kingdom" instead of the Mushroom "World".

Some of the world names during the ending were changed. In the Japanese version and the original US release, the worlds have more distinct names which were later changed to "____ Land".

Retrieved from "https://tcrf.net/index.php?title=Super_Mario_Bros._3/Version_differences&oldid=839804"
Categories:
Cleanup > To do
Subpages