Super Mario Maker 2 is the sequel to the Wii U original, featuring a new style based off of Super Mario 3D World with unique features, a full-fledged Story Mode, local and online multiplayer (in both co-op and competitive flavors), new elements in Course Maker (including slopes, the Superball Flower, a few items from Super Mario Bros. 2, and Link), Super Worlds, Ninji Speedruns, unlockable Mii costume parts, various tweaks around the edges, the addition to play as Luigi, Toad and Toadette, and the removal of Mystery Mushrooms (you'll get your chance one day, Windows logo).

Outside of being on a console that people actually bought, that's pretty much it.

Your favorite graphics from Super Mario Maker are back. Once again, there are castle bridge graphics that resemble the Super Mario Bros. ones, and once again they're unused. The snow theme (both day and night) and sky theme even have unique bridge sprites!

Mysteriously, almost every finished castle bridge design has brown bits at the bottom that are seemingly from the placeholder tiles. Probably just a minor mistake done when Nintendo added the finished sprites.

In the Underwater (Night) tileset, there are two tiles for darkened P-Blocks that have an unknown purpose. The empty one has a different shape than the one used in-game. These sprites can be seen by performing a glitch that allows you to port objects from the 3D World style and back. These sprites are the same color as the background seen when removing the alpha channel of this tileset, meaning these sprites are just leftovers in the alpha channel.

Four character-specific flag designs that likely would have been used after grabbing the flagpole, much like in the New Super Mario Bros. U style.

A square found 16 times in each Plains tileset.

These pipes seemingly disappear when disabling the Forest tileset alpha channel due to them using the same colors as the background, suggesting that the original sprites were deleted and the sprites visible are leftovers from the alpha channel.

Sprites were added in v3.0.0 for the Buzzy Beetle and Spiny helmets that were intended to be used in conjunction with the P-Balloon powerup, and have a series of texture animations (float_cancel_ftp, float_end_ftp, float_ftp, float_jet_ftp, float_move_ftp, and float_start_ftp) which make use of them. However, pairing both powerups simultaneously in-game results in the helmet being discarded, rendering these unseen. They can be triggered through co-op editing. First, Player 1 has to hover the cursor on the character. Then Player 2 has to grab the P-Balloon. When Player 1 opens the power-up menu, Player 2 has to put the P-Balloon on the character, and then Player 1 has to select either Buzzy Helmet or Spiny Helmet. These sprites also keep even after switching from edit mode to play mode. You can view this glitch by clicking this link. 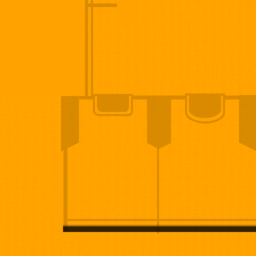 The texture for the arms and neck of the Chomp-Dog Shirt Mii outfit has an unused area for the main shirt without the Chain Chomp. 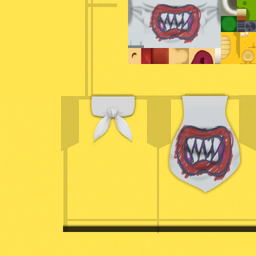 The texture for the Slobbery Shirt has Bowser Jr.'s texture, which goes unused in this shirt.

There is an unused 17th frame for the Parent-and-Child Skirt, which has a darker shadow and only 1 Blooper Nanny.

The file for the Skull Skirt contains an early version of the Pipe Skirt texture. This texture is 128x128 pixels, while the final texture is 512x512 pixels.

An early texture for the Shy Cap with a wire-frame template, a bigger mouth, and no face, arms, or tail. 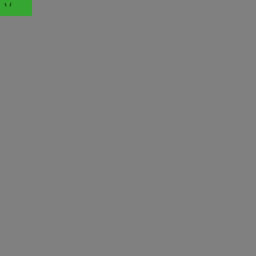 An unused texture for the Yoshi Hat that only consists of a nostril texture. These nostrils are different from the ones that are used. 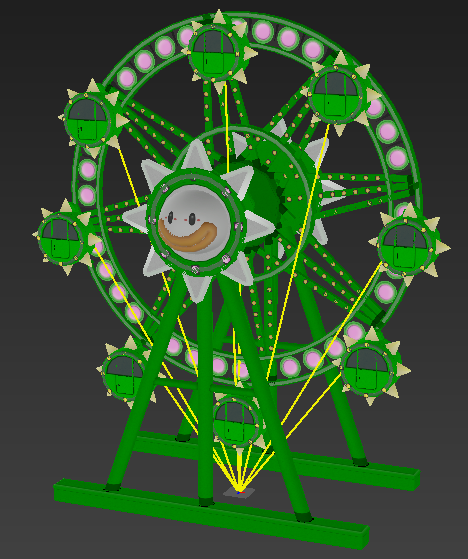 An unused model of a Ferris wheel named 3W_DVObj_airship_FerrisWheel. Based on the file name, this likely would've appeared in the background of the Airship theme. 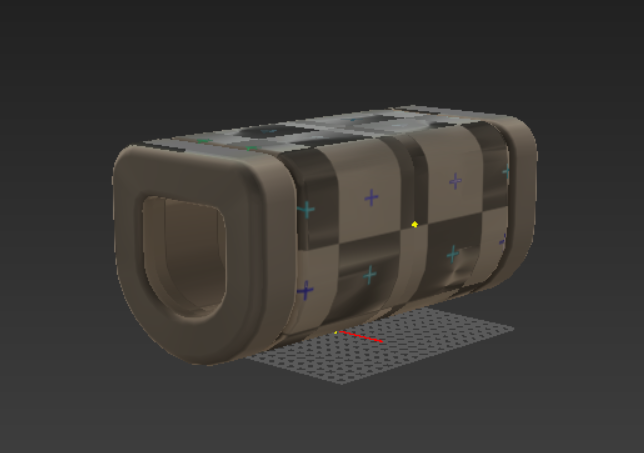 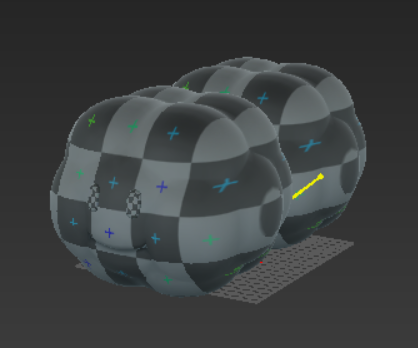 An unused model for the Cloud Block named editwait_block_kumo_model. This model, like the Donut Block, is untextured. From the front, it's more wide than the final model and from other views there is an indent in the middle, making it look like there are 2 clouds. 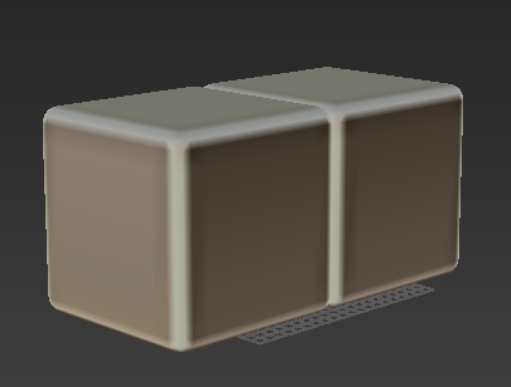 Some sounds are leftovers from the first game.

The sound that played in the first game when placing wings. In the sequel, wings aren't an object that can be placed and are instead an option that appears when holding down on an object. Located in Pack\StaticHighFreqSound.pack\Edit_Wing.bars.

Two sounds of Weird Mario from the first game still exist within the game's data.

A sound of Gold Mario from New Super Mario Bros. 2, used for the gold and silver costumes in the first game.

The sound that played in the first game when placing a Mystery Mushroom. Located in Pack\StaticHighFreqSound.pack\M1_EditKinokoFunny.bars.

Two audio files relating to the Flip Boards from 3D World (seen in courses like Cakewalk Flip) exist in the files, but are never used.

The files which contain the names of the course parts as used on the parts menu ( MessageData\ReferenceMsg_, \PartsIconName.msbt, \OtherPartsName.msbt, and PartsIconName_plural.msbt) contain names for course parts that don't exist in the game. Alternative pluralizations of these do not exist, whereas they do for some used objects.

Presumably a form of the Koopa Troopa, like with Buzzy Beetles and Spinies.

This is the stone object used for the Story Mode-exclusive "Reach the goal while holding a stone" Clear Condition.

No kind of Fireball can be placed in Course Maker.

The Stilettos cannot be placed without a Goomba in them.

May possibly refer to a Buzzy Beetle or Spiny shell.

Yoshis outside of Yoshi Eggs can't be placed directly.

The msbp file contains references to some (uncompiled) text files that don't have equivalents in the game:

Dying in the Hub

If the player hacks the game to remove the invisible edge barriers in Story Mode and falls down the front, the screen will fade out and the game will bring Mario back to the middle of the hub world. This was likely intended as a failsafe if the player managed to glitch past the invisible walls.

The Stone element can be hacked into the Course Editor, and has a number of functionalities normally not seen in Story Mode:

The Toad course part can also be hacked in, though their functionality is much more limited and broken. When in the editor:

The SM3DW exclusive parts all have unused weights when placed on a Seesaw. These can be seen by glitching the Seesaw into the 3DW style.

Through a variety of glitches, several course parts exclusive to the original four game styles can be forced over into the SM3DW game style, and vice versa. While these course parts lack sprites (and or appears invisible), they are semi-functional to various extents. Unfortunately, most of these course parts will crash the game when imported.

The animation of carrying players is actually an early, placeholder version.

The outlines for Fire Mario's cap and shirt when riding in a Dry Bones Shell are miscolored red like the normal form, aside from his victory pose and the arm of fire shooting.

Some animations use Mario's untanned skin tone, like his normal form.

In the 3D World style, when Magikoopas turn blocks into Goombas, the game spawns the SMB/NSMBU Goomba object instead of the SM3DW one. This object displays different behavior, walking faster and not charging at the player when approached.

The game's codename is "Slope", according to strings in the executable. The first Super Mario Maker had a codename of "Block".

Similarly to the first game, the European English text refers to Magikoopas as "Kameks" and Skewers as "Spike Pillars". This also applies to the Magikoopa Mii outfit.

However, unlike the first game, the sounds when placing them are unchanged.

Released on January 7, 2020, in celebration of 10 million courses being uploaded.

Released on April 22, 2020. This was touted as the final major update, and with the massive amount of additions and changes, it certainly shows.