Super Mario Strikers is all about kicking ass and taking names, Mario style! 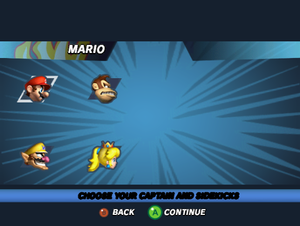 The E3 Version has some leftover code in the data. Only four Captains are playable, the left team defaults to Toad, the right team to Koopa Troopa and the Stadium defaults to The Underground stage. By enabling this mode, this also locks every mode except for Grudge Match.

There are four .dsp files in the game that were used for testing left and right audio channels. They are orchestral versions of the Super Mario Bros. and Super Mario World overworld themes, performed by the Tokyo City Philharmonic Orchestra at the Game Music Concert in 1991.

(They both sound the same, so there's no point in having two of the same sound file.)

This file isn't mentioned in any of the sound effect lists. It's a low-quality copy of the tournament loss track with a snippet of crowd booing mixed in. The file name indicates that it was a placeholder for later crowd yelling sounds.

A number of sound effects in the game go unused, as evidenced by their entries being commented out in the file lists. (For more information, see this section.)

These seven clips were originally to be part of a random set of crowd chants. The first one sorta sounds like the claps from "We Will Rock You" by Queen, oddly.

The end of the file is corrupted on the right channel.

The end of this file is also corrupt. This also happens to be the only chant that fades in and out rather than looping.

In the list of crowd sounds, there is a section dedicated to random chants. However, there is only one valid entry. The remaining seven sounds are all commented out. According to the file names, these random chants would have involved clapping and stomping.

A number of files refer to "MarioGoalie", and other files also refer to "mariosidekick", "luigigoalie", and "luigigoalie". As was found in the E3 2005 build in Demo Disc 31, "MarioGoalie" is actually a Kremling goalie with an early Mario jersey. It's assumed that originally the rest of the characters were going to have their own Kremling goalies wearing their respective jerseys.

The file Stadium.ini has a list of the stadiums in the game, but with different names. The following names are in the same order as in the file. Italicized names have been changed.

The list of stadiums also includes an eighth stadium, Peach Palace. It has the internal name Peach_Toad_Stadium and a grass field. The entry for it also contains the following note:

It was likely removed in favor of The Palace, the last stadium to be added.

A number of the earlier setting files in the game refer to a "tornado" or "twister" power-up. It was one of the last power-ups added, and was replaced by the Chain Chomp power-up. In fact, the file that sets the default power-up options uses "Twister" for the Chomp item. While the sound effects for it were removed, an effect for it is still defined. It would have included flashes of lightning.

According to one of the sound effect lists, Mario's Super Strike originally used a hammer. Say, wouldn't that be cheating...?

The internal files for this game are very neatly organized. In fact, almost every parameter in the game is controlled by plain-text .ini and .txt files. There are also a number of other development-related files left in, including a dozen HTML files. Nearly all of the files are heavily commented. However, much of the commenting is mundane, such as labeling sections. As such, only the unusual comments will be listed here.

Included on the disc is a set of files for a program called tag_elf_region. The Python script is used to call the C++ program, which would then set the region code for the already-compiled disc image. The source code for the C++ program is also included.

In the Debug directory, there is one file, named debug.glg which contains a model of a ball. 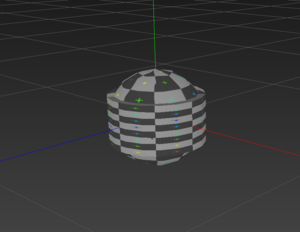 A sound effect trigger file for MarioGoalie exists at art/animation/MarioGoalie_triggers.txt. It has a different organization compared to the other trigger files, with no section header comments, indicating that it is probably an earlier file. At the top is a small info section on how to use these files. However, the first line isn't commented out, so the game would have tried to read it.

Other trigger files fix this little mistake, but truncate it to remove everything from the "run" line and below. Only Goalie_triggers.txt keeps the lines. Based on this, it is likely that this was an earlier version of the Goalie trigger files. If this is the case, then it indicates that the goalies originally made a lot more noise than in the final game, where they are mostly silent.

This commented-out line is located in the catch_right_high event, at line 126.

This comment is found in the dejected_02 event at line 629, regarding the use of sound effects for footsteps. It should be noted that none of the other trigger files have any dejected events.

There are a number of commented-out lines in art/effects/scripts.fx that indicate changes to how certain special effects in the game would have played out. One of the lines indicates test events for performing Super Strikes, called mike_test and mike_test2.

A number of the files include a set of instructions at the top on how to properly use the template. The most complete instructions are for transition effects, found in the file art/transitions/transitions.fx.

There are a number of full HTML pages(!) present in the audio directory for the purpose of monitoring the status of every sound effect associated with every character. They indicate a number of sound effects that didn't make it into the game. Every sound effect comes with a description that indicates how the sound is triggered. Sounds that weren't ready at the time are highlighted in red. The files themselves were created using Microsoft Excel 2000.

The comments provided in the files for Mario Strikers Charged reveal that DifficultyHuman.ini is actually used for the AI on human-controlled teams, while the other two early files were for testing purposes.

In the section for Shot Accuracy lies what is arguably the best developer comment in the game.

Mike Inglehart is the Game Director. This line actually survived on in the game files for Mario Strikers Charged.

A size for small shells is defined, but no percentage for how often it should show up is defined. Note that the big shells are defined as having a size of 1.0.

Excuse me? This is the only other comment in the entire file that uses slashes instead of # for commenting.

The file glx.ini contains settings for giving out memory. There is a line for adding extra memory on for debug purposes ("resource debug add"), and a line indicating how much memory was to be given for the E3 demo.

The file GoalPostDimensions.ini, which defines the size of the goal in each map, contains the following comment in the sections for Forbidden Dome and The Palace.

The file for the unlockable Super Team has an extra comment inserted in the line for Shooting percentage.

The file license-bsd.txt contains credits for the engine the game uses.