From The Cutting Room Floor
Jump to navigation Jump to search
This page contains changes which are not marked for translation.
Other languages:
Deutsch • ‎English • ‎español • ‎français • ‎polski • ‎português • ‎português do Brasil • ‎русский • ‎日本語 • ‎한국어

Super Mario World is the first Mario game on the SNES, rushed and hacked together in time for release.

Despite that, it's considered a high point of the franchise, partly due to the ridiculous amount of non-linearity and secrets within the levels. Also, Yoshi.

When this object is put into a level, the level will start out with a horizontal Layer 1 section, then transition into a vertical Layer 2 section. It only functions in levels with the layout mode set to 05 or 06. 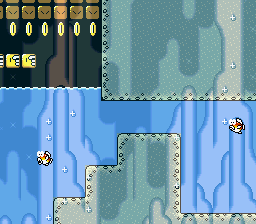 Early screenshots showed a flooded grassy area using mode 1F, with water on one layer and ground on the other. It may have been abandoned due to the obvious lack of a background layer when using this mode, and may have prompted the later addition of a non-transparent layer 3 water mode.

Object graphics indexes: A, E
Graphics-wise, index A (Switch Palace 2) is identical to index 4 (Switch Palace 1), except it uses tileset 3, which is normally used by underground levels and castles. As a result, all tileset-specific objects are scrambled, making the index mostly unusable.

Index E (Underground 3) is identical to indexes 3 and 9 (Underground 1 and 2), except it uses a forest/mountain background GFX bank. This would have allowed for above-ground rocky levels, similar to those of World 6 in the New Super Mario Bros. series.

The layer 3 image is the slow left-scrolling rocks.

Sprite graphics index: F
Index F is identical to most of the other sprite indexes, save for the SP4 GFX bank (14), which only appears in one other index (B, Switch Palace). GFX bank 14 contains the pipe, block, Bullet Bill cannon, and Yoshi Coin graphics seen in every background tileset, none of which are used by any sprite in the game. It's possible that a set of sprite graphics existed in this bank at one point during development.

Pressing a silver P-Switch will turn Munchers (Map16 Tile 12F) into coins, as it does for most other enemies. None of the levels have an opportunity to do this, however. 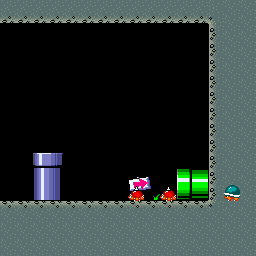 A Buzzy Beetle can be found at the very end of Donut Plains 2, stuck inside a wall. Because the screen slowly autoscrolls at that point, it can never be seen, and even if it could be seen, it would just fall through the floor. This oddity does not exist in the GBA remake. 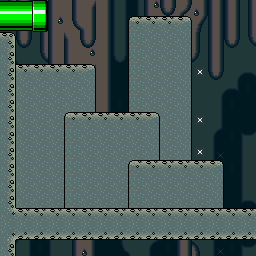 There's a pipe in Vanilla Secret 1 that leads to a secret exit. In the screen right above that one, there's warp data that takes the player to the same exit. This was done to fix a bug with the secret exit pipe: if Mario enters the pipe while riding Yoshi, he'll be just high enough (by a single pixel!) to be on the next screen up. Instead of just, say, moving the pipe down a block, they instead duplicated the warp pipe data. 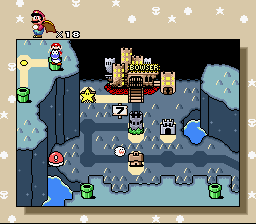 Interestingly, Valley of Bowser 3 has its Enable path on secret exit value set to Left, whereas all other single-exit levels have it set to Up, implying that there was a path there at some point. Nintendo probably figured the player would have little need for red Switch Blocks by this point and (wisely) decided to make the Palace accessible from Vanilla Dome 2.

Interestingly, the graphics for the orange, purple, and green tiles are identical, but are stored as separate tiles. This suggests that the door once had a much different appearance, and the purple and green tiles were originally used for something else, like doorknobs or hinges. 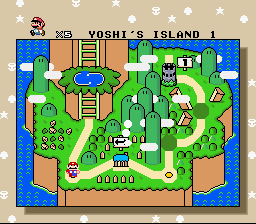 There are some blank tiles in the overworld graphics banks, which are drawn over the pathways Mario takes. These tiles were once used by the developers to indicate where the unrevealed pathways are.

This feature can be enabled with this patch:

At one point, it was possible to have a Starman in the reserve item box (though exactly how it would get there is a mystery). There is even a routine that specifically checks for the Starman item ID (03) and cycles the colors appropriately, though it appears to use incorrect palette values (00 02 04 02). Shifting each value left by one bit (00 04 08 04) fixes this.

Pro Action Replay code 7E0DC203 will force a Starman to appear in your reserve item box. 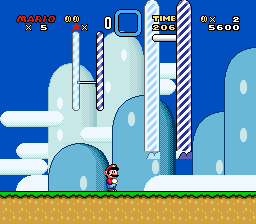 Though never seen in-game, Goal Posts have a bottom tile. It's likely that they were intended to float above the ground at one point, much like the similarly-styled midway points do in the final game. The rounded part was overwritten at sometime in development, but the graphics were recovered from the 2020 gigaleak here.

Normally, the bonus table caps at 1-Up after stomping eight enemies in a row. However, due to a programming oversight, this does not apply to Wigglers! Starting from the tenth stomp, you'll receive a 2-Up, a 3-Up, and then the following unused bonuses:

After 25 coins, each successive stomp will overflow the bonus table and give a glitched bonus, which is often worth a very large number of points and coins. None of the unused bonuses appear correctly; the 5-Up pulls its attributes from the code following the bonus sprite attribute table, while the coin bonus graphics simply don't exist. However, they can be seen in the SNES Test Program, as shown above.

Though none of the game's levels feature more than two or three Wigglers in a row (due to their processing overhead and large sprite count), it is possible to revert them to their calm state by scrolling them off and back onscreen while floating with the cape, at which point they can be stomped on again to increase the bonus count. The easiest place to do this in the game is in Forest of Illusion 1, on the log platforms above the keyhole. 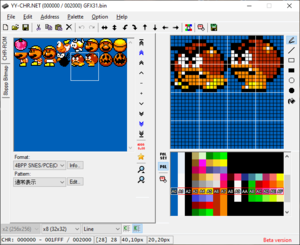 Extracting the graphic files through Lunar Magic and viewing them through YY-CHR, the GFX31, which contains the Special World changed enemies, has an unmodified duplicate of the Galoomba graphics, which are actually used by the game when the Special World has been cleared. It's possible that at one point, clearing the Special World would have made these enemies change appearance drastically just like they did on the GBA remake. They don't have similar sprites for the falling through parachutes graphics on the graphics bank however, so using non-identical graphics for the enemy in this graphic file would cause both designs to clash.

The Game Genie code DDA6-DF07 enables a free movement/instant flight mode. Hold L and press A once, and you'll be able to fly (provided you have a cape) as soon as you start running. Hold L and press A again, and you will be able to move Mario anywhere in the stage. Hold Y to speed up Mario's movement, or press L and A again to return to normal gameplay. This was removed in the European version.

Additionally, if you go past the seventh and final "defeated Koopaling" scene, you can view the credits.

The Game Genie code EDA5-0F6F enables a power-up select not unlike Super Mario Bros. 3. Hold Up and press Select to switch between Small, Big, Cape, and Fire Mario. This was removed in the European version.

The Game Genie code ED60-642D will let you choose what Yoshi you want on the map screen. Press Select to cycle through the different Yoshi colors (None, Yellow, Blue, Red, Green).

Super Mario World has a little-known category of secrets, where having Mario touch four invisible and silent trigger points in a level in the correct order will cause a 1-Up to spawn.

The only way to discover these in-game is to stumble across them by chance (some are much more obscure than others), but Lunar Magic's level editor will show their locations on maps that include them.

There are 15 of these accessible in the game:

"Valley of Bowser 2" is the only level to contain more than one set of triggers (other than the unused "test" maps), but once one has been collected, the other is deactivated as well.

It's relatively well known that if you stare down a Boo Buddy for approximately eight (real-time) seconds, it'll briefly make a face at you. (These frames are also used for other Boo-related enemies, like Circling Boo Buddies.)

However, less widely known is that Big Boos also have a similar behavior. They, however, require you to wait for approximately 16 real-time seconds before reacting, double the time.

The popular theory of levels that are represented as a big dot in the overworld map is that these are long levels, but some levels don't actually meet this criteria. Big red dotted levels actually seem to represent big split points, meaning they have secret exits leading to alternate routes that have fortresses which can't be reached through the main route:

None of this applies to the only yellow big dotted level in the game, Vanilla Dome 3, which still remains a mystery.