This page details one or more prototype versions of Super Mario World (NES).

The first cartridge release (known as the Volume 1 version, possibly hinting that they had originally planned to release the rest of the game as Volume 2) of the NES Super Mario World was a prototype, with a plethora of differences. The finished game was released on the JY-120 Super 45-in-1 cart and was later put onto standalone cartridges.

Note: To see the rest of the map in the early version, change the address in 039E to 1F or higher. Do not enter any of the unfinished levels if you want to see the whole map, as exiting one places you somewhere else on the map.

The overworld has several differences:

While the levels after the fourth castle are present, none of them are complete. Use the same address and value as above to access them.

Unlike most of the unfinished levels, this has powerups (although the Springboard is missing) and enemies (although only the Red Koopas are used)! There's also several layout changes:

At this point, several Red Koopas are stuck in the flip blocks, whereas the final only has naked Koopas walking off of the blocks. Maybe Hummer Team intended to have enemies popping out of the blocks like in the original?

A blue pipe was added to this spot for the final, which leads to a bonus room.

The background above this pipe was moved up a bit and was given a dark spot.

No layout changes. Of the enemies and powerups, only the P-Switch is present at this point.

No layout changes, although no enemies or powerups are present at this point.

The last unfinished level to have enemies. The Dry Bones and Bony Beetles are missing, but the Fuzzies and Podoboos are present. Interestingly, you can walk on top of the lava without getting hurt. This is the only way to get to the secret door at the end since the moving platform for it is missing.

Instead of a normal flip block, there's a flip block that actually uses the flipping animation. Unlike the official versions of SMW, this just acts as a standard solid block.

No enemies or powerups are present at this point. There's also a strange bug where if the game is paused, all of the ? Blocks disappear until the game resumes.

The gap between the blue pipe and the goal was made longer in the final, for whatever reason.

No enemies or powerups are present at this point, including the P-Switch.

The hole at the beginning of the level is one tile smaller.

Another empty level. The pipe cannons don't work at this point, so you'll need to use a cheat that allows you to move further.

Despite the fact that the Muncher graphics (not the unused ones of the final, but rather the static background tiles) exist in the ROM, they appear to have not been implemented yet. Touching the white tiles can still harm you, though.

No enemies or items here, including the spikes moving from the floor and ceiling. Similar to Forest of Illusion 4, this also has a pause bug...but in this case, all lava tiles turn into flip blocks or vines and the ? Blocks turn into coins.

The first spike pit was moved up one tile.

Near the end, before the boss door, there are three pits with a Thwomp next to them in the final. At this point, there are three Thwomp areas with two spike pits and a ledge between them for where the Thwomp would fall.

Another level devoid of enemies and powerups. Also missing are the rotating platforms; you'll need to use a cheat to advance further in the level.

The block was shifted over one tile to the left under this blue pipe.

Devoid of mostly everything: enemies, powerups, coins, background stars...and collision. If you jump, you'll end up standing in mid-air when you begin to fall.

The pipe that serves as the exit for the bonus room is not yet present.

No layout changes, although no enemies or items are present at this point. 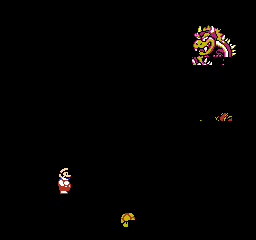 Trying to access the stage takes you to the Bowser fight. The background tiles (including those used for the Koopa Clown Car) are missing here despite being in the ROM, with the propeller using the wrong tiles.

Bowser is unbeatable here, as he doesn't toss out any Mecha-Koopas, but unlike the final you can exit the stage by pausing and pressing Select.