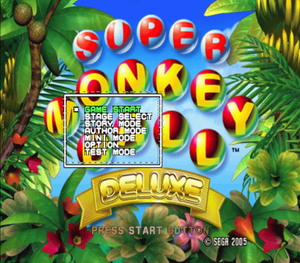 The main debug window, accessible at the title screen.

Super Monkey Ball Deluxe, essentially being a port of Super Monkey Ball 2, shares the same debugging elements as its predecessor. These features can be enabled in the PlayStation 2 version using one of the following cheat codes:

Alternatively, you can apply the below patch to default.xbe to have the debug mode always enabled.

In the PS2 version, the debugging functions are not particularly stable, and a good portion of the options and tools either do not do anything, or appear to have been deleted. For example, the ball position debug tool will always report a position and speed of 0. Certain debug menu tests, such as the sound and ADX tests, will crash the game, while others lead to a blank screen that can be left by pressing Start. Attempting to access certain levels on the stage select screen will crash the game, as well. This only occurs when attempting to load the stage itself, as it is possible to view the stage models using the in-game model viewer. However, there are some differences to note between Super Monkey Ball 2's debug menu and the Deluxe version, as some features that would crash Super Monkey Ball 2 work perfectly in this version.

The mini mode allows for party games to be quickly launched. There are four other options that do not function properly in Super Monkey Ball 2 that work in this version.

The legacy option menu from Super Monkey Ball 1 makes an appearance here. The ranking system has a different appearance than the one found in Super Monkey Ball 2. The controller calibration screen features a control stick calibration menu, where a box must be drawn out with the analog stick. This calibration system existed in Super Monkey Ball 2, but is not accessible by normal means in the PS2 version of the game. The calibration tool apparently works, but the outline of the box is much thinner and multiple circles of the analog stick are required to fill an entire box. The mysterious "debug data" also makes a return in Deluxe, its purpose is not currently known.

Unlike the DIP switch menu found in other Super Monkey Ball games, there are small notes describing the function of each DIP switch in this version. 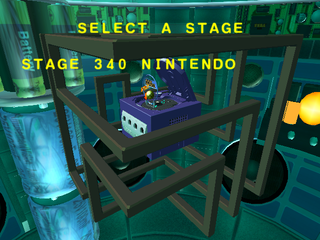 The Nintendo GameCube level left over from Super Monkey Ball 2. In Deluxe, it was replaced with Destiny, a rotating dice. 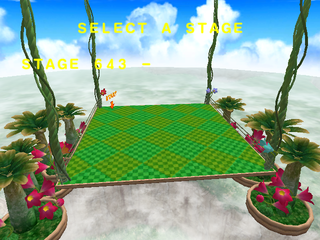 Mid-Summer Jungle Square, one of the Monkey Fight arenas from Super Monkey Ball. 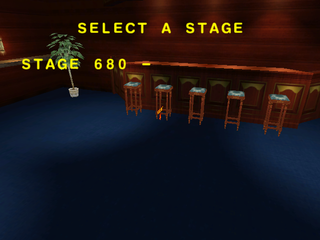 The Amusement Vision logo chime from the first two games which is never used here.

Although both the Xbox and PS2 ports are identical content-wise, the PS2 port was downgraded a bit due to its weaker hardware.