Super Princess Peach finally gives Peach a solo starring role, and this time it's up to her to save Mario and Luigi instead of the other way around.

It's a solid game, as tends to be the norm for the Mario series, and the gameplay revolves around a distinctive gimmick...though the fact that said gimmick focuses on Peach's emotions has made more than a few people uncomfortable.

A Calm version of the pre-boss room music. It's impossible to activate the Calm vibe in pre-boss rooms because you're always put in them at full health with no way to take damage.

There are various unused stages in the game's files. All of these (excluding Iggy's unused boss stage) are areas used to test various gimmicks including Vibe puzzles, Perry transformations, and...Sad Goombas. For those who have not fully played the game, these puzzles are explained in the descriptions of the stages.

To access these stages in the US version, use the following Action Replay code (where "?" is the hexadecimal unit shown for each stage) and enter a level.

1: The main test stage. It has a Coin Bag, two Koopa enemies, spikes, breakable blocks, and an abundance of pipes; most of them lead to nowhere, but a unique exception are three pipes that lead to different test stages, complete with graphics on them. The pipe with a submarine sends you to the top-right corner of 4, where it is impossible to get out. The pipe with the graphic of the carriage takes you to 5, appropriately, and the pipe with the graphic of a boat sends you to 2. 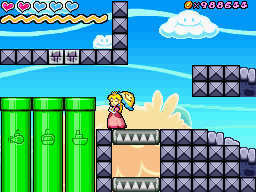 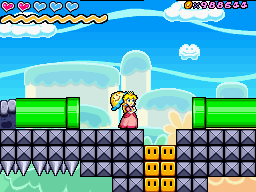 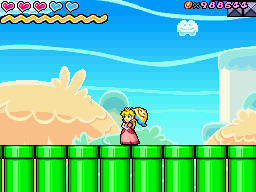 2: A maze with a whole lot of Sad Goombas - so many that the game starts to lag immensely and graphics start to disappear. On the top of the maze is a pillar and a trampoline; however, it is impossible to jump over it even with the trampoline, as the top of the level cuts off access. 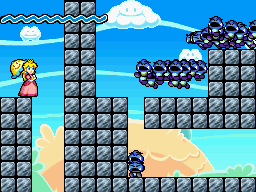 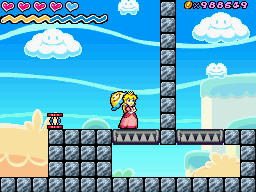 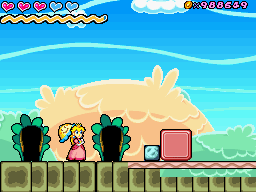 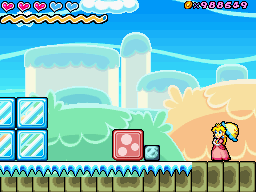 4: Another pink block, strip of land, and ice block level. The layout seems to imply you were supposed to freeze the strip, hit the pink block once, then go into the path and take the newly accessible door, but it's impossible to freeze the strip since the low roof is in the way. Also present in the level are some pipes in the upper-left corner; the only accessible one takes you back to the main test stage. 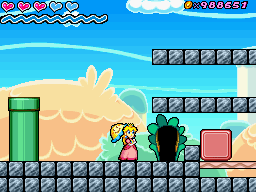 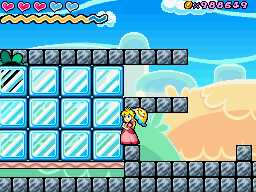 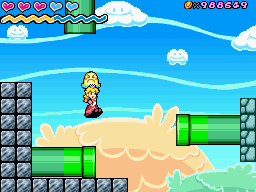 5: A Slidebrella test stage. If entering this level without the Slidebrella upgrade, it'll be waiting to be picked up on top of the oddly-textured (and destructible!) platforms. The rope has a few gaps and lower ropes to go off, but most of it goes on until the end of the screen, where it is impossible to fall off...or do anything else. The door at the beginning sends you straight to the top-left corner of 3, where it is impossible to get out. 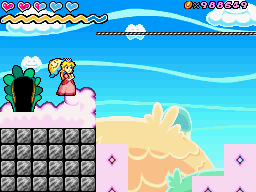 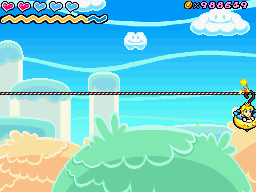 6: A small room with motionless lava, some spikes, a ball, trampoline, and a large block. They are all able to be picked up, and respawn after a while upon touching the lava. 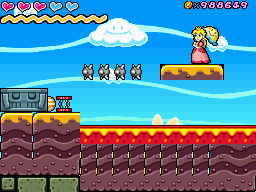 7: A level filled with destructible blocks, Coin Bags, and enemies. Strangely, it is able to be completed by touching the goal posts; doing so takes you to the nonexistent "World 0", a black screen with no music located left of Wave Beach on the World Map. 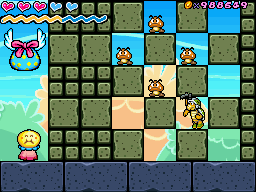 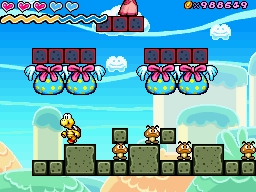 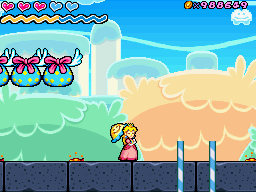 8: A level consisting of an unused block type, an on/off switch, and an odd-looking hill. Hitting the switch enables extra platforms to appear. Despite the similarity in looks that the blocks have with the destructable kind used in-game, they are indestructible. 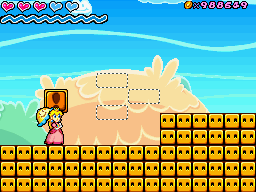 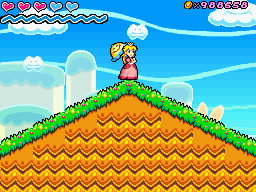 9: It's Iggy Koopa! ...But the level ends as soon as the sphere dropping down touches him, which is almost immediately as he spawns. The game then acts as if a boss is defeated, and hands you a Toad. Afterwards, there's a Perry dream sequence in which nothing is shown, and you're dropped off at the nonexistent "World 9", which is above Bowser's Villa. 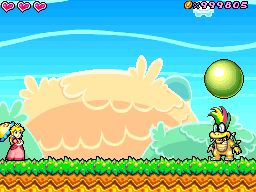 A: A level that has the two flying obstacles from Bowser's Villa. Also present is a ball, and to the far right of the screen are pipes that don't go anywhere. 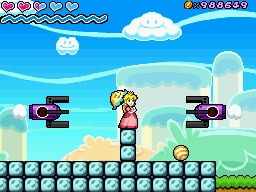 B: A cliff with early tiles. On the other side is an object that can be spun using the Sad Vibe; spinning it results in the message "A loud noise came from somewhere!", though nothing with the level is changed. The pipe in the far right doesn't lead anywhere. 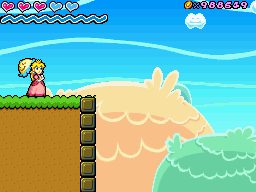 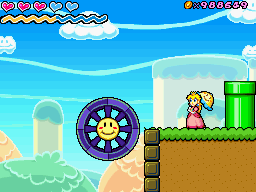 Unused sprites exist for all seven Koopalings, which suggests they were at one time intended to appear in the game, likely as bosses as their animations suggest. For one reason or another, they were scrapped and wouldn't return until New Super Mario Bros. Wii. Interestingly, the order they were intended to appear in is identical to the order they appeared in Super Mario World. Note that Roy and Morton's shells are green; there are no palettes that color them pink and grey, the colors their respective shells usually are.

Iggy appears in an unused level map, but only his idle animation is implemented despite having a full enemy animation set internally, and the game behaves as if a boss is defeated as soon as he is spawned.

Sprites for Goonie, the large bird enemy from Yoshi's Island. The skeletal variant makes a cameo in the ground tiles for World 5's boss minigame, but not as an enemy. The graphics are straight from Super Mario Advance 3, with the palette darkened to resemble the colors used in the original game.

There exist two unused Goomba variants from early in development, with colors and actions representing Glad and Calm. The final game has only the Mad and Sad Goombas.

An early Goomba in a radically different art style than the one the final game has, probably from extremely early in development. His color and sprites seems to imply he's a Glad Goomba.

Another early Goomba, using an art style reminiscent of the one used above. His color and sprites imply he's a Calm Goomba. One thing to note is that Calm enemies in the final game do not have a separate green palette - they're just asleep.

"PUSH START" was changed to "PRESS START" on the title screen for international versions of the game.

The L and R button sprites were redrawn to look more like the buttons on the console.

The price labels in Toad's Shop use the same font as the coin counter in the non-Japanese versions of the game.
(Source: http://www.themushroomkingdom.net/spp_j2e.shtml)

When highlighted, the music names in the Music Room, as well as the enemy names in the Glossary, move from left to right in non-Japanese versions of the game.

In the US version of the game, Petey Piranha is mistakenly referred to as "Boss P. Plant" in the Glossary (a direct translation of his Japanese name, "Boss Pakkun"). This was fixed in the European version.

Present only in the Japanese ROM are various 3D models and textures, many of which are based on characters and settings from the Densetsu no Stafy series, also developed by TOSE. Most of these files were copied over to Densetsu no Stafy 4, going unused there as well.