Super Street Fighter II Turbo was another tweak/release/whatever of Street Fighter II, and was pretty much the definitive version of the game (at the time). This entry in the series marks the first appearance of the popular hidden Ryu head swap character, Akuma (Gouki in Japan). It was also the first fighting game to use Super Combos. 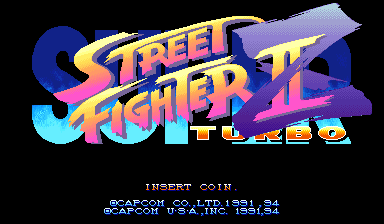 This mockup title screen shows how the Z would've looked on top of the normal title. 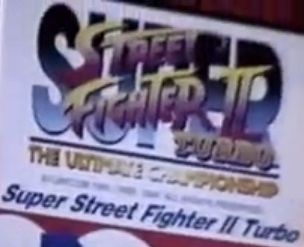 New hidden character Akuma has several unused frames of animation, some of them which would later be used in X-Men: Children of the Atom.

An extra frame intended for the beginning of his far standing hard kick.

Two frames intended for the startup and recovery of his vertical jumping light and medium kicks.

A unique electrocution sprite, with Akuma's characteristic topknot. In the final game, he borrows Ryu and Ken's. This likely went unused because it isn't properly indexed to fit the palette electrocuted sprites use, instead seemingly being indexed to fit Akuma's normal palette.

He also has the same unused Hurricane Kick startup animation frame that Ryu and Ken have (although in Ken's case, it's more "used to be unused").

His downward-angled Zanku Hadoukens get a newly-drawn angled variant of the standard projectile impact animation... and just like the standard one, its last frame goes unused as the effect disappears before it can be displayed.

Interestingly, dizzied sprites for Akuma do not exist at all. He is the only character in the game that cannot be dizzied, but since this is an otherwise global mechanic and his sprites are mostly modified from Ryu and Ken, it might be reasonable to expect that dizzied sprites for Akuma exist...but they don't. (For his Children of the Atom appearance, he can be dizzied and so he has the similar dizzy sprite that Ryu and Ken have here.)

Sprites for an unused variant of Cammy's Hooligan Combination exist in the raw graphics data. Here she spins on a vertical axis rather than a horizontal one. No associated tilemaps or animation data seem to exist.

Along with the animations for the newly-introduced sharp and shallow-angled variants of Dhalsim's drill kick exists an animation of a horizontally-oriented version (which was made by slightly redrawing the animation of his head drill attack). The animation has no attack box assigned and has the same vulnerability boxes as the medium-angled drill kick, implying it was abandoned fairly early in the development process.

Special sprites for a full super meter effect go unused in the graphics data. The finished game simply uses the game's standard font and an electricity effect from the title screen.

They were likely intended to flash like this upon a character's life becoming low, like the one actually used in-game.

The "TURBO" in the game's title screen is actually formed from a font set, the rest of which goes unused.

The previous entry in the series had a special variant subtitled "The Tournament Battle" which allowed 4 networked cabinets to be used for 8 player tournaments. It would appear that a similar variant was planned for this game but never realized. Many graphics seemingly intended for such a version remain unused in the game's data.

A The League Battle subtitle, very similar to the one used in The Tournament Battle.

A set of large ranking numbers, complete with proper suffixes (and even an alternate Japanese suffix).

Some messages, written in the font used for TURBO text in the title screen, except that they are stored separately and have different gradient.

An explanation of the tournament rules in Japanese. Translates to:

This is substantially different from the rules of the previous Tournament Battle variant, which used a 3-round single elimination style format.

Cammy's graphic in the intro sequence is slightly cut off by the bottom of the visible screen, which in addition to being blocked by her gauntlets causes much of her body to be unseen.

Speaking of which, the gauntlets extend beyond the bottom of the screen as well. 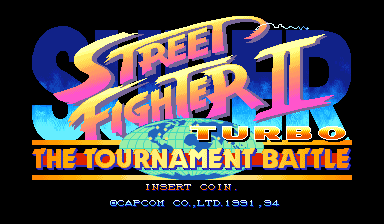 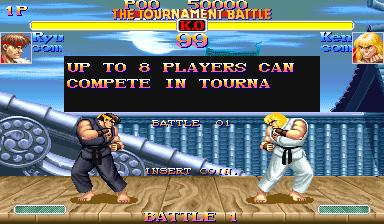 The framework of Super Street Fighter II‍ '​s Tournament Battle mode remains in Super Street Fighter II Turbo. Setting address FF8349 to a non-zero value will enable the mode. It has not been updated to incorporate the new graphics or rules that were seemingly intended for the League Battle mode. Exactly how complete this implementation remains is not known at this time, due to incomplete emulation of the CPS2's networking capabilities.

A few of Akuma's animation frames have some of his hair or gi clipped off, although the tiles for them actually exist.

Of the eight frames that exist within the raw graphics data for Akuma's trademark fiery aura animation, only six have tilemaps defined...and the animation data doesn't even play those in the proper order!

Sound code 00D2 is a piece of music most likely meant for an ending.

Sound code 00C1 is another piece of music most likely meant for an ending.

Akuma/Gouki actually has win quotes in the Japanese version but unlike other characters, not even a single quote was localized in the international versions and instead in the victory screen no text appears when he is the winner.

Akuma as the Last Boss

On the introduction of the secret fight with Akuma, in the Japanese version, there's a brief quote that appears soon after he attacks M.Bison/Vega (Dictator) and just before his fight starts. In the international versions, he doesn't say anything, the fight just starts as soon as he deals with Dictator with his Shun Goku Satsu. 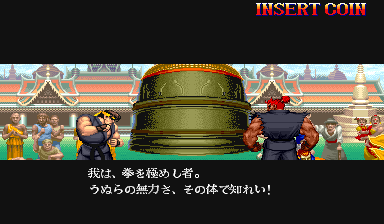 This also makes an animation of Akuma holding the Dictator by his hair go unused in non-Japanese versions.

The game has two different endings if you're playing as Akuma: one if you defeat his secret boss version (Shin Akuma) and the other if you defeat Dictator. In non-Japanese versions, all the dialogue was removed.

The Ending After Defeating Dictator 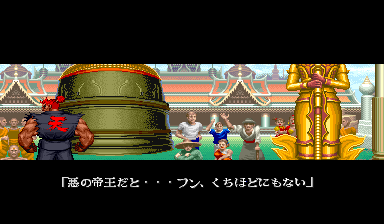 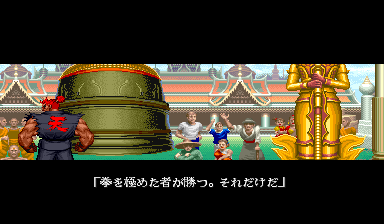 The Ending After Defeating Shin Akuma 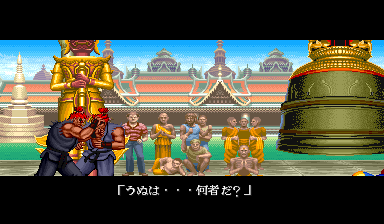 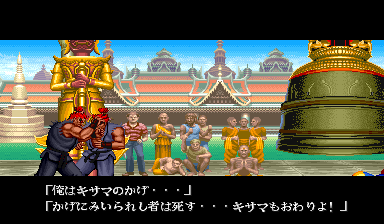 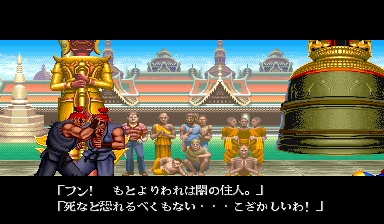 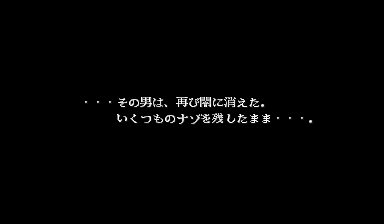