Arguably the best Superman game released, which is saying a lot.

This Japanese text is found in the game's graphics and gets overwritten by the player sprites. It translates to "Superman font goes here (64 characters)". 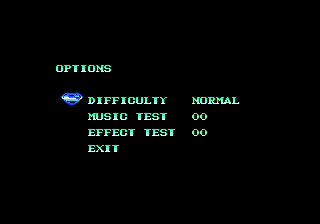 An options menu appears in the European version when pressing the Start button, allowing the player to change the difficulty and allowing one to listen to the game's audio. On top of the menu being available, the following text is shown when beating the game on the Practice difficulty:

While the menu is not available in the US version, the text is still in the ROM. ROM address DF30 has the practice difficulty ending text, while E0DD and E29A have the options menu text.