This is a sub-page of System Shock.

There are several objects defined in OBJPROP.DAT which do not appear in the game.

The sections for object classes on this page refer to the names of classes as referred to by the game's source code. 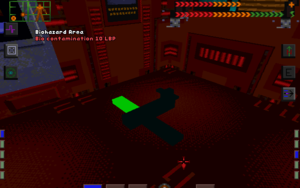 The file OBJ3D.RES contains definitions for 3D models numbered 0 through 79, used for various decorative objects throughout the game. Approximately 20 of these aren't used by any objects, and all resolve to the same "dummy" model. The model resembles a small green airplane with one wing fading between light and dark green; it may have been initially used to test 3D models in the game before any proper 3D objects were implemented.

These two dummied-out objects probably would have behaved similarly to their counterparts in Terra Nova: Strike Force Centauri, which was partially developed at the same time as System Shock.

Attempting to turn this hardware on doesn't have any visible effects at first, but attempting to search a corpse or container with it activated causes a partially visible, unusable "search" panel to appear at the top of the screen rather than the bottom, suggesting that the game's interface may have originally had a different design. Doing this can also cause the game to stop responding to the player's input, for some reason, although it's still possible to move the cursor. 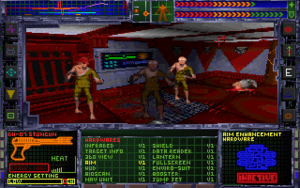 Both the aim enhancement and HUD goggles can be seen in a few pre-release screenshots, though they don't really provide any clues as to how exactly they would have worked.

In addition to the few unused hardware items, there is a good deal of unused software. Almost all of these have MFD background icons in MFDART.RES. Very few of these items are actually usable.

In a feature from the March 1995 issue of PC Gamer, it is mentioned that "while Cyberspace was originally conceived as a realistic hacking simulation—which could even be used to reimplement SHODAN's ethical constraints—it was simplified after Origin Systems deemed it too complicated." These items are probably all remnants from that original concept. 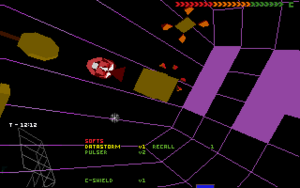 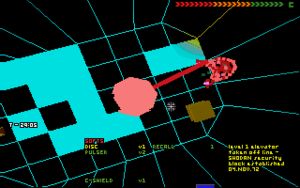 These two weapon softwares can be picked up, but do not do anything when used.

This software displays the message "item rejected" when you attempt to pick it up. A "destroyed virus" type also exists with the rest of the container and corpse types, along with unused "destroyed" versions of the other cyberspace programs; this suggests that it may have been intended to let you summon "friendly" programs that would attack cyberspace enemies.

These also display the message "item rejected" when you attempt to pick them up. Although they can't be added to the inventory through normal means, they have background icons anyway.

These also display the "item rejected" message. They are part of the same subclass as the Trioptimum Fun Pack Module, suggesting that they probably would have been for use outside of Cyberspace.

This may have been intended to automatically map out parts of the level for you when picked up.

Two unused types of light sources. Could have been used in any number of places. Technically, these objects do appear in cyberspace, but the game treats them as software with the same subclass and type values, as a hack to get around the number of software objects that can be placed in a single map.

It's a VCR. Presumably, Trioptimum finally decided to switch to optical media at some point. The model also lacks a texture, suggesting it was scrapped relatively early into development (or maybe it never had one to begin with).

It's a keyboard. Probably scrapped because it would have looked a little bit out of place.

This resembles a wider version of some of the "control pedestal" objects, with similar texturing and blinky lights. Just like the control pedestal, this can be made to trigger other objects or display a security camera view. Might have simply been scrapped in favor of the smaller electronics models.

This is in the same subclass as the security camera, and may have been intended as an additional security device. The model seems to be oversized or poorly scaled.

Two more unused grove objects. While there are still plenty of vines around, they only appear in the form of textures, not sprites.

This is an object in the "plants" subclass, probably intended for use in the groves.

Two 3D railing objects that could have been used on the executive level, the groves, or a number of other places.

A solid rectangular object with an obvious placeholder texture. May have been used to test collision with 3D models.

Two dummied-out objects that probably would have showed up on the medical and/or research levels somewhere.

A cyberspace object. Has a unique model, and if destroyed by the player, adds up to 30 seconds to the cyberspace time limit (applied starting from the next time the player enters cyberspace). Normally this can't actually be destroyed within cyberspace, since it isn't vulnerable to any damage types by default.

A strange cyberspace object which uses the dummy model. The object's internal short name is "SHRINE". This object is not actually unused - instances of it are sometimes barely visible in distant, isolated areas outside of the normal cyberspace levels, but none of them are physically accessible.

Normally, this object is what spawns the SHODAN "enemy" that targets you and boots you out of cyberspace when the time limit runs out. The internal short name combined with its editor icon (a small ankh-like symbol) and lack of unique model suggests that it may have originally been intended to look different.

Also uses the dummy model. At some point in development, ICE may have been used to physically block off areas of cyberspace as well as software, but only the latter function remains in the game.

Three decal types that don't have any graphics.

Two unused objects which have a subclass all to themselves. Their intended purpose is obvious, but there are no purchasable items (or currency) in the final game. When placed in a level, the game actually treats them the same as the objects in the "receptacles" subclass, meaning they can be set to accept a particular type of item from the player's inventory, and theoretically a trigger action could be used to spawn an item nearby after being given the correct type of item by the player.

Note: in order for the vending machines to show up correctly, the objects' render types must be changed from 2 (regular sprite) to 8 (wall sprite).

An object from the same subclass as the energy charge station and the cyberspace terminal, it uses the dummy model. This was probably the same thing as the surgery station.

A cyberspace object which uses the dummy model. Being in the same subclass as the cybertoggle, it probably would have served a similar purpose - i.e. allowing the player to unlock remote areas from within cyberspace.

These are all used as placeholder objects by the game engine, but their (amusing) names cannot actually be seen by the player. "Salt the fries" refers to a well-known inside joke between the developers.

An alternate version of the impaled mutant that appears on the medical level. These may have originally been intended to appear more often than they ultimately did.

Two animated objects which no longer have graphics.

Two unused types of "trigger" objects of the type used to activate various in-game events. These two varieties activate when the player is either inside or outside of a specified radius around the trigger. They may have been originally used in sequences that were later redesigned.

Two more unused trigger types. These ones don't do anything.

These were probably originally intended to designate "toxic" areas, but this is handled by flags in the map data instead. These also don't do anything.

"Dead" versions of unused enemies. None of them have graphics. The last type ("destroyed robot") has no "alive" version corresponding to it; the words "destroyed" and "robot" also have two spaces in between, likely from a word having been deleted.

Dummied-out "dead" versions of every cyberspace enemy, including the unused "virus" and "dynamic ICE." Rather than leaving behind "corpses" in cyberspace, the programs simply fade out/disappear when killed. 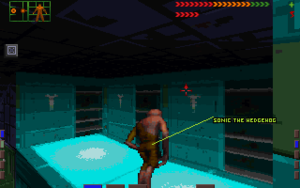 This was probably hilarious in 1994.

The actor used for the player character. Uses the humanoid mutant sprites, within the "mutants" category. It has almost no AI; when placed into the level, it simply follows you around at all times and gets in your way. It has similar stats to the humanoid mutant, but with 60 hit points instead of 50. The name seems to be an odd in-joke referencing the fact that elements of System Shock, such as the roller skates, were inspired by the gameplay of Sonic the Hedgehog.

A clearly unfinished enemy, it may have been another idea for a type of "animal" mutant that the player would find in the groves, although its simplistic and under-detailed sprites give it a very non-organic appearance.

Despite being named "large turret", this actually looks a lot like an unfinished version of the Security-2 robot. There is an unused Security-3 bot as well, but it has no graphics; it is possible that the Sec-3 had previously used this type number. This unfinished enemy has very few unique frames, and can only be seen "properly" from the front. For all other angles, it uses the same sprites as the Hopper.

An unused cyberspace enemy which uses the dummy model. Most likely would have been something like a more mobile version of the existing ICE protection.