Tak and the Power of Juju (GameCube, PlayStation 2)

When in doubt, take the stick out!

Although it appears in the Game Boy Advance version of the game, the mysterious Numa Bay was removed very early on from the main console versions and all that is present in the final game is the accompanying music (which is used during the credits). There are also unused audio files that were meant to be used as tutorials in the level.

There is a fence placed waaaaayyyy outside Mountain Top North, which is impossible to see without hacking. 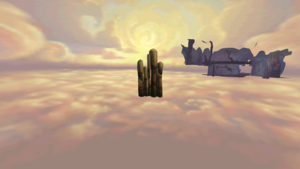 Someone forgot to delete this fence! It is not visible during normal gameplay.

Tak and the Power of Juju has a PLETHORA of unused audio clips, mostly unused tutorial dialogue wherein Flora pesters the player even more than usual. Here are some of the more interesting audio clips.

Originally, you couldn't heal Tak by just picking up feathers. You would have to cash in feathers you've collected at designated health shrines. Does that sound unintuitive? Because it was.

Above is an audio clip of Flora discussing feathers and how they are used with health shrines, meant for the tutorial.

In the final game, Flora refers to the buttons universally by giving each button a name for what it does. For example, what the game refers to as the jump button is the A button on GameCube and the X button on PS2. While they are still separate buttons in text, the voice actors never differentiate them. However, this wasn't always the case.

It's interesting to note that the PAL PS2 version actually has Flora refer to the buttons as they are on a PS2 controller, but the PAL GameCube version just uses the universal terms. Strange.

Tak and the Power of Juju has a total of 16 juju spells for Tak to utilize, but unfortunately, some didn't make it into the final game.