Takahashi Meijin no Boukenjima IV is the final game in Hudson's Adventure Island series for the Famicom. Because of its late release in the system's lifespan (in fact, it was the final official Famicom game ever), it was never released outside Japan. This entry takes a much different, non-linear approach compared to the previous three titles, requiring you to seek out various items and abilities in order to access new areas. It also does away with the old hunger meter, opting to use a standard life bar instead (and there was much rejoicing). 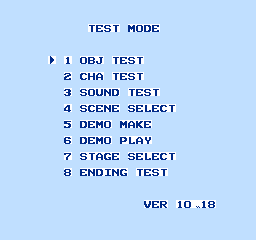 The game contains a debug menu very similar to that of Hudson's Adventure Island II. To activate it, use the Game Genie code GYSXPPEK (or change ROM address 0x18169 to 7C), then choose PASSWORD on the title screen.

The menu options are pretty straightforward. The two DEMO options allow you to record and play back your own demo, like the one shown after the title screen, although it's erased when you unload the ROM (unless you set the "battery-backed SRAM" bit in the ROM header).

Beginning at ROM address 0x3AB1E is a series of unused text strings:

Interestingly enough, 10-18 is actually written to the bottom-right corner of the screen shortly after reset, but is immediately overwritten with the intro background. This is the only time the text drawing routine associated with these strings is ever called. 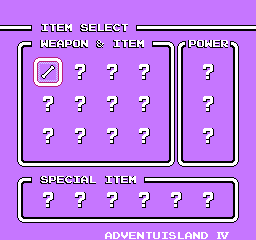 The oddly-truncated string "ADVENTUISLAND IV" is written in the overscan area at the very bottom of the item select screen. Since this is not visible on the majority of NTSC TVs, its purpose is unknown.

It's worth noting that the tileset used specifically for this string does contain the letter "R".