Tales of Symphonia was one of the first Tales games to be in 3D and to get a worldwide release. It later got a Japan-only PS2 port which added some of the missing content, like a casino minigame, and some worthless additional techniques, and of course long loading times.

Upon performing Hi-Ougi (Mystic Artes) with Lloyd, Genis and Colette, cut-ins appear over the screen with that character's face. Oddly enough, there are unused cut-in graphics for the rest of the party members (Presea even gets two), plus Abyssion and Mithos, on the GameCube version disk. They were used in the PS2 port. You can see them here. 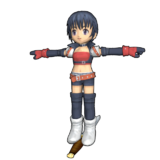 On the NTSC version, after enabling the following Action Replay codes, you can press Z when on any area to teleport to the following locations, although there is the risk of your character getting stuck in the scenery. You can also save and load for quick access to these areas.

There are two NPCs here, and a bunch of airships lacking collision detection. The area's 3D model itself abruptly cuts off at some point. It seems to be meant for testing camera angles: 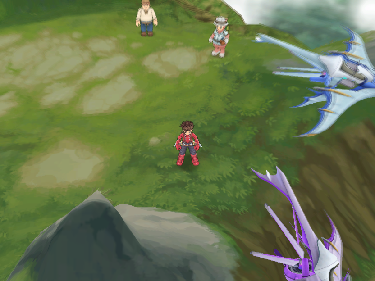 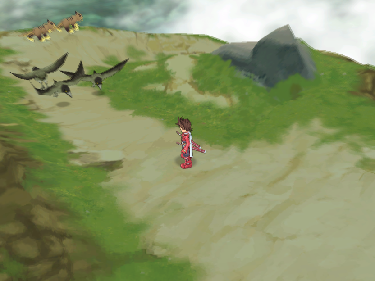 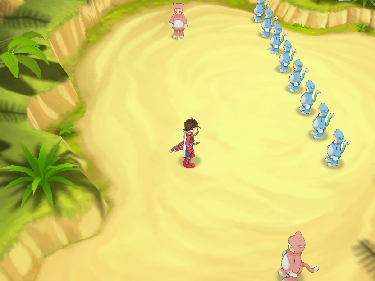 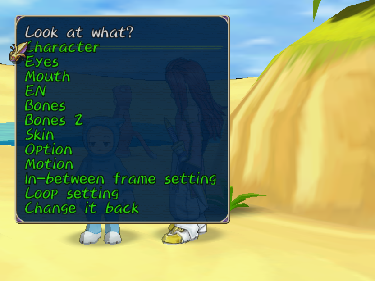 This is by far the most interesting area: it features a row of blue NPCs which, when talked to, allow you to freely edit their characters' 3D models! The available options are: 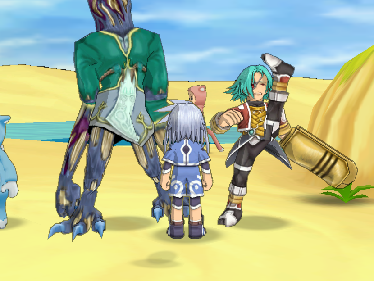 There are also three pink NPCs, one of which is obstructed initially by the camera view, which changes after talking to the blue NPCs:

Some techniques are only available with Action Replay codes. Some deal no damage, they often glitch the game, especially when used in Unison attacks, and there are ones which outright crash the game.

The Sound Test has some battle cries recorded for scrapped Artes (though most of them were seemingly removed from the English version). Many were implemented in the Japanese PS2 version, but some went ultimately unused.

Within the "sound" directory of the game's files, there are six unused music tracks.

A very fast-paced, high-energy tune. Sounds like a battle theme.

A laid-back track that sounds very much like a town theme.

A somber rearrangement of Zelos' theme.

In the Japanese version only, you can edit the names for all of your party members. For some reason, this option was made unavailable in localized versions, rendering the naming screen unused in the process. You can still access it in said versions by editing the save file directly.

All sound files for the voice acting of the Z button skits have been deleted from the localized versions, akin to all Tales games until recently. The timing of the English text is still unchanged from the Japanese version: for instance, Sheena spends a lengthy time saying "I..." in the English version, accounting for the longer Japanese equivalent of the sentence. Undub versions re-enabled said voice acting.

In the Japanese version, a Sound Test is unlocked upon completing the game, available on the title screen. It was made unavailable in English versions, much like in Phantasia's GBA port, but is still fully functional, featuring a very early translation that retains the Japanese names (Refill for Raine, for example). It can be accessed on Disc 1 in the US version with Action Replay codes, by selecting Customize on the title screen.

The Japanese version's opening song is "Starry Heavens" by Day After Tomorrow. This was changed to an instrumental song in the international versions.

The US and European versions have completely different fonts for dialogue and other text.